Getting to know your child’s thyroid gland | Texas Children's Hospital

Getting to know your child’s thyroid gland 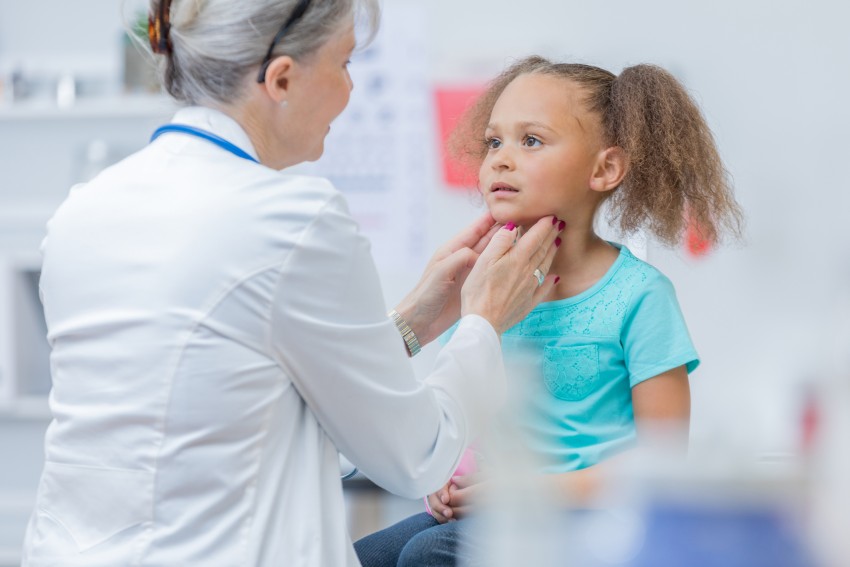 If you aren’t familiar with the thyroid – the butterfly-shaped endocrine gland in the middle of your neck, located in front of your windpipe (trachea) – let’s get up to speed.

The thyroid gland functions primarily to influence metabolism, which is defined by how our bodies convert fuel from the food we eat into the energy need to survive. It does so by producing hormones, including triiodothyronine (T3) and thyroxine (T4), which also help regulate body temperature, heart rate and blood pressure.

These hormones are very carefully controlled by both the thyroid gland and the pituitary gland – also known as the “master gland” located in the brain. The pituitary will release thyroid-stimulating hormone (TSH), which then travels to the thyroid and signals it to produce and release T3 and T4. The thyroid hormones will then give feedback to the pituitary, signaling a decrease in TSH release when the body has enough thyroid hormone.

For infants and young children, proper thyroid function is critical for normal brain development and growth.

The most common pediatric thyroid conditions arise when the gland is hypo- or hyper- functioning, but others include thyroid nodules and thyroid cancer. If any of these conditions are suspected, your child will be referred to a pediatric endocrinologist for further evaluation.

Congenital hypothyroidism is present at birth and diagnosed through a newborn screening. It typically occurs when the thyroid gland doesn’t form properly – it’s missing, too small or formed in the wrong place. In some cases, the gland does form properly but can’t produce the hormones regularly.

In hypothyroidism, T4 is low and TSH is high. Our standard newborn screen checks for both hormones. Therefore, nearly all cases of congenital hypothyroidism are discovered with an incidence of 1 in 3,000 births.

However, since both labs are checked, there’s an increase in falsely positive results. If your child’s newborn screen shows signs of hypothyroidism, your child’s doctor will repeat the lab work.

If hypothyroidism develops after birth, the most common cause is an autoimmune disease in which the immune system makes antibodies that attack and destroy the thyroid gland. In this case, hypothyroidism will be diagnosed with labs ordered by your child’s physician.

The symptoms of hypothyroidism include:

The standard treatment for hypothyroidism is straightforward – daily use of the synthetic thyroid hormone levothyroxine, which restores adequate hormone levels and reverses the signs and symptoms of hypothyroidism if taken as prescribed. This small, well-tolerated pill is easily swallowed or chewed for older children. It can be crushed and given to young children, too.

We’ll initially order lab work every three to four months, which will move to twice yearly once stabilized and performed annually once growth is completed.

There’s a common misconception suggesting all children with obesity should be screened for hypothyroidism. However, if your child’s height is increasing normally on their growth chart, hypothyroidism is very unlikely.

My clinical research interests focus on pediatric thyroid disease and the genetic factors which are associated with cancer, hyperthyroidism, and congenital hypothyroidism in infants and children. I am also investigating the safety of Radioactive iodine treatment in children with Graves disease...