Danielle’s story: A ligament repair helped me return to the gym 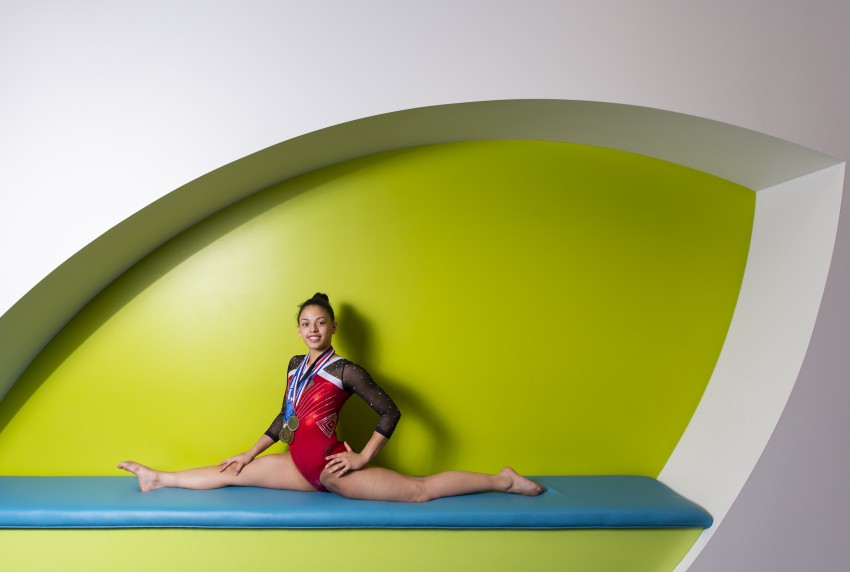 Since the age of 8, Danielle Press has loved the sport of gymnastics. Training multiple days a week for years, the gym became her home away from home. Through hard work and dedication, Danielle ascended to the rank of level 10 gymnast.

As with any sport, injuries are an unwanted, albeit, inevitable reality.

“One day she was doing a drill on the bars and caught her elbow. It hyperextended and popped. We thought it was possibly dislocated,” Sarah Press, Danielle’s mom, explained.

Sarah rushed Danielle to Texas Children’s Urgent Care where an X-ray thankfully revealed nothing was broken. However, the clinical team suggested the family follow up with a sports medicine specialist.

Danielle was evaluated by Dr. Kristin Ernest, sports medicine physician at Texas Children’s Hospital The Woodlands. Dr. Ernest conducted a manipulation test and determined Danielle most likely had strained her elbow very badly. Following medical advice, the Presses elected to proceed with a conservative approach to care and Danielle began physical therapy to try and help her elbow heal.

“Everything was going well,” Sarah said. “Danielle was getting stronger and she only had a couple of days of PT left.”

Then, while rope climbing during a training, Danielle’s arm locked up and she couldn’t close her fist; her elbow gave out again.

“It happened so fast. She slid nearly two stories down the rope,” Sarah explained.

Danielle followed back up with Dr. Ernest following this second incident, which was nearly two months after the first. It was determined additional imaging should be done and Danielle had her elbow evaluated via an MRI.

After speaking with Dr. Kushare, the family weighed their options. They could try and do another round of PT which had a 50/50 shot at working to help reconnect the torn ligament. However, if they elected to do that and it didn’t work, they would essentially be putting off a surgery Danielle may inevitably still need three months down the road.

“I clearly remember when I mentioned to the family in clinic that Danielle needed elbow surgery. Both Danielle and her mom cried inconsolably because they really thought her gymnastics career was over,” Dr. Kushare reflected.

Typically, the surgery performed on this type of tear is known as “Tommy-John” ligament reconstruction surgery and comes with an 18-24 month recovery time. Danielle wanted to get back to the gym, back to training as soon as possible. This type of reconstructive surgery would make that very difficult.

This is when Dr. Kushare explained to the Presses that Danielle could be a candidate for another, more recently established surgical technique – UCL repair with internal brace. Compared to the reconstruction – or Tommy John – surgery, the ligament repair wouldn’t need a graft thereby expediting the patient’s recovery time.

“With the ligament repair surgery, Danielle would be able to return to sport in a shorter amount of time, only four or five months, as opposed to 18,” Dr. Kushare informed them.

However, as Dr. Kushare explained to the family, he wouldn’t be able to tell for sure that Danielle was a candidate for the repair until he saw the torn ligament. If they went into surgery and the ligament was frayed, and not a clean tear, Danielle would need to undergo the Tommy John reconstructive repair.

On Feb. 9, 2018, Danielle underwent her primary repair surgery as her mom and grandfather sat in the waiting room and hoped for the best. There, waiting with them, lending her support as ever, Danielle’s teammate Bridget, along with her parents, sat with Sarah and Danielle’s grandfather during the surgery as well.

“Me and her grandfather were both pretty nervous; you never know what to expect,” Sarah reflected on surgery day. “It was Danielle’s first major surgery, but we were blessed. It would seem Danielle was a perfect candidate for the ligament repair. Her surgery lasted two hours and only a short time after that, we were able to go home – the same day as the surgery.”

Through excellent rehabilitation with Texas Children’s sports physical therapists at the hospital’s state-of-the-art sports therapy gym, in just five months Danielle, a level 10 gymnast, was back to the sport she loved the most and hasn’t experienced any problems since the surgery.

“She wears a brace, but has no pain, no issues; she’s back to normal,” her mother reported.

In fact, Danielle just completed a full competitive season and is actively being recruited for collegiate level gymnastics. As a testament to her strength and dedication, she has won several medals at different events, evidence of her excellent recovery.

Danielle is a strong, determined female athlete. “It was scary at first, but you can't look at it in that way. I just had to think how far I came and how far I still have to go,” Danielle said.

When asked what advice she has for others who are facing a similar challenge, Danielle said, “Never think about the negative, always think about the positive. Yeah it's going to have its ups and downs, but don't give up. Just listen to your doctor and PT support. It might get hard, but just push yourself. Trust me, it will get easier. Always tell yourself, ‘I can do this!’”