Claire's story: Braver, stronger than ever 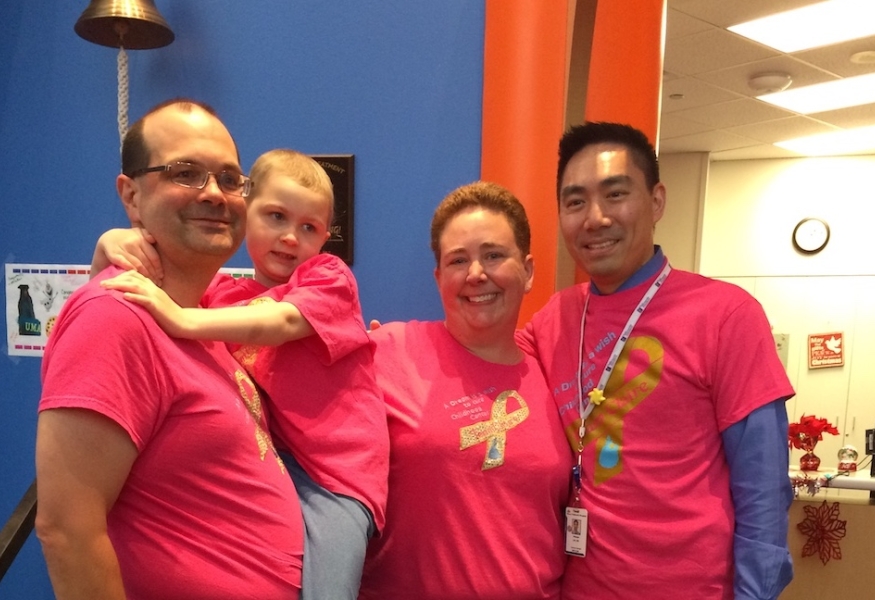 My daughter, Claire, was regularly complaining of headaches. Claire’s neurologist ordered an MRI in early December 2016, which was performed just two days following her sixth birthday. Immediately following the MRI, our medical team wanted to speak with us even before we left. “Oh no,” I thought – in my experience, I never had to speak with the doctor right after an MRI test.

They found something – a tumor. The next day, Claire had surgery to remove the tumor, which ended up being medulloblastoma, a type of brain cancer. Those words were life-changing.

Claire spent eight days on the neurosurgery floor, and then another three weeks on the inpatient rehabilitation floor, where she learned how to walk, talk and feed herself again. I remember shortly after posting an update on Facebook about Claire walking 20 feet on her own, which was a huge accomplishment given the circumstances. Sadly, a 6-year-old should be running or skipping, not learning how to walk again. Soon after, Claire began vomiting frequently, which still happens today but not as badly. It took her medical team several attempts with different medications to help with the vomiting. Claire started radiation the day after she was released from the hospital, which I thought would be the easy part.

She had to be sedated every day for her hour-long radiation treatment, because any slight movements could impact the precise proton therapy. Claire’s vomiting continued, even with medications, and she didn’t want to eat because she was constantly sedated. She started losing weight, and eventually had to get a feeding tube after losing 17 pounds. The feeding tube had to be placed before she could start her chemotherapy, which caused a delay before we were even able to get started. When it was time to approach chemotherapy, all I could think about was the fact that I was signing papers allowing poison to be pumped into my child, which would require even more medications and further complications. Still, you sign the papers, because what other choice do you have?

Next came the infections around her feeding tube, caused by low blood counts. She ended up needing around 15 transfusions of either blood, platelets or both. I tried to keep count of these transfusions, but I lost it. Following the fourth cycle of inpatient chemotherapy, she probably had transfusions twice a week. Claire’s last inpatient chemotherapy was during Hurricane Harvey. Thankfully, Texas Children’s Hospital was ready for this, and they took great care of us.

Claire was then ready to approach some “easier” outpatient chemotherapies, but had to stay in the hospital even longer for a feeding tube infection. Easier chemotherapy meant no hospital stays, but we still spent a lot of time doing outpatient chemotherapy. Claire’s liver counts were impacted by the chemotherapy, which caused us to skip a dose of it. You would think that I would be happy to avoid a dosage, but not when you know this poison is the best shot your daughter has at surviving. This was also a trial, so nothing was guaranteed.

Finally, Claire completed chemotherapy and rang the bell on Dec. 7, 2017, signifying the end of her treatment. In January, she had her port removed. This is bittersweet, because now she’ll need an IV when she receives an MRI every three months. She isn’t a fan of getting poked, but we know she’ll be able to get through anything with the courage she showed during treatment. Children with cancer are so brave, and keep pushing along with their treatment without even considering defeat. They’re so much braver than adults. The chemotherapy shoots through their veins and damages their little bodies while trying to help them survive at the same time.

Through everything, we’re so grateful to be here in Houston with access to the best medical care. People from all over the world come here to be treated at Texas Children’s, and all we have to do is brave the bad traffic. We get to sleep in our own beds, we didn’t have to separate our family, we’re so grateful for this.