Charlie’s story: To infinity and beyond 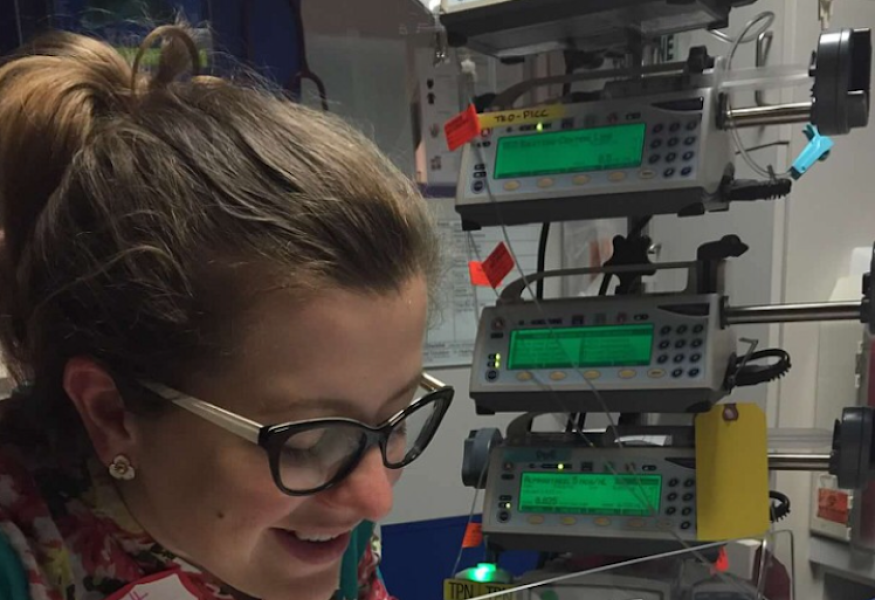 An orange astronaut helmet is soaring through space modules as a little boy glides with his arms outstretched; he’s oblivious to the large crowds at NASA as he navigates outer space and galactic objects. Today marks a year since his last heart surgery. His lips are pink, his oxygen level is at 97 percent, and I’m over the moon with joy and gratitude. His name is Charlie Tremayne, and you would never know he’s living with a congenital heart defect (CHD). He’s my son, and he’s the bravest boy I know. Like astronauts and teams of scientists before us, we have courageously charted new territories and taken giant leaps of faith while navigating the unfamiliar. This is our journey into the unknown, where few things are certain outside of God’s grace.

I once had a plan. The blueprint was pretty basic, and included zero design for infertility, threatened miscarriage or even CHD. It certainly did not prepare me for my son’s premature birth and his three ensuing heart surgeries. Fortunately, God’s plan is always better than our own, and He guides us through it with the help of others so we can come out stronger and better than before.

During the 16-week-mark of my pregnancy, the ultrasound showed that a prior bleeding was no longer present, and though it was a bit early for an anatomy scan, we went ahead to see the tiny organs forming in my little man. Everything was perfect! He had 10 tiny fingers and 10 tiny toes. Liver? “Great!” Kidneys? “Super!” Heart? There was a pause. Our technician’s natural jovial expression turned forced. Something was very wrong. It turned out, Charlie’s heart appeared to suffer a severe defect. Hundreds of questions began flooding my mind. What’s going on with his heart? Can we fix it? Is this a big deal? The biggest question came out as a mixed statement. “He’s going to live, right?”

This is when we discovered the greatest medical crew Houston had to offer. This team helped a boy come into this world and not just live, but thrive. I’m talking about the wonderful individuals in the cardiology department of Texas Children’s Heart Center. Our first new family member, Dr. Keila Lopez, would deliver the diagnosis – double outlet right ventricle with a straddling mitral valve. She would continue to explain Charlie’s defect with diagrams, she answered all of our questions with detail, and developed a plan to help. More than this, she would offer her honest (and liberating) medical perspective. Charlie had a severe heart condition that can’t be “fixed,” and though there’s often no long-term prognosis, nobody can say how long he, or any child with this defect, would live.

I remember feeling an extreme contrast of emotion. I was all at once horrified, but also anxious, lonely, calm, comforted, broken but yet whole. There are no words to describe how one could be so thankful and certain, yet also angry and confused. We faced terrible and wonderful news. Charlie had a heart defect, but we had people willing to help us! We were to follow a surgical pathway similar to one used for HLHS patients. First, a BT shunt was placed, then the Glenn procedure and lastly the Fontan procedure. Each had to be performed in a specific time frame, and each would work toward the end goal of non-passive blood flow in the heart. I’m tempted to go into detail about each surgery, hospital stay, emergency room visit and person we encountered, but I’ll stick with the highlights.

First and foremost, our mission to make our existence beautiful despite obstacles is an ongoing endeavor, and I have my son’s special heart to thank for it. We don’t take a moment for granted, and we find solace in the triumph that comes with choosing faith regardless of the outcome. These are the moments where we found light in the darkest of places.

Charlie’s very first moments of earth caused an immense and indescribable longing. He was supposed to be cradled in my arms, but instead, found himself surrounded by neonatologists and cardiologists. Despite prior tours and explanations of how brave hearts enter the world, I found myself unprepared to carry the heaviness of my empty arms. Only the honor and love that comes with being a new mother kept my tears of sorrow at bay, and only the courage and strength that comes with being a heart mom kept me uplifted. In these moments of suspense, somewhere between the strongest gravitational pull in the universe and the forceful suppression of sorrow, did I find my center. It was created in the peace that comes with support from family and friends and the continued knowledge and patience of complete strangers from Texas Children’s.

My sister pushed my wheelchair down the hospital halls at the speed of light just six hours after Charlie’s delivery, across the bridge to the NICU floor. We were a mixed mess of tears and laughter as our beautiful trauma was met with angels on earth. If you’ve ever been to a NICU, you’ll understand what I mean. One of our angels, Arwen, introduced Charlie as a precious meatball in a bed of noodles. To this day, I smile fondly at her perspective on a tiny preemie immersed in life-saving tubes and wires.

Charlie needed emergency incubation following his birth, received his first heart surgery at just 9 days old and went home two weeks before his due date, despite coding on the day of his surgery. It’s always this way with Charlie. He shows us how a catastrophic event is not the end, but merely a beginning to a braver existence. At 4 months old, he had his second heart surgery several months before anticipated. It was a day before my birthday, and his room was decorated with Toy Story toys. I thought his birth and first surgery were scary, but I was nowhere near prepared for this one. Since taking him home and getting to know him, the thought of losing him was more terrifying than before. Before, I knew I loved him and couldn’t fathom life without him. After four months of his smiles and crinkly nose, I couldn’t even recall a life before him.

In true space cowboy fashion, Charlie went home three days before anticipated and was released on Mother’s day, the best gift I could ever receive wrapped in a Woody blanket. We spent hours dancing and singing, pushing the buttons on Buzz Lightyear as his tiny chest healed. I could have admitted it was hard giving him sponge baths and keeping him quarantined, but instead, I recall those forced moments together as some of the most treasured ones in my life. Not only did I have the insight and wisdom that all moms enjoy from pediatricians and close family and friends, but also I had access to expert pediatric cardiologists and developmental specialists. They would each take time to encourage, educate and ensure we were on the right track, and they became an incredibly utilized asset.

As we became more accustomed to life outside of the hospital, the time between doctor appointments and visits became more sparse and intimidating. I’m an educator trained in early childhood development, and I was confident in coaching my son through proper development, but raising a child with a unique heart is a separate thing entirely. I often felt as if we were left in outer space, orbiting the more familiar territory of the hospital’s experts, and Texas Children’s became our own special command center. Despite the delays and impairments associated with premature birth and CHD, Charlie has always been at or above level in regard to development. Texas Children’s Cardiac Developmental Outcomes Program is specifically designed to monitor and intervene as necessary so that blasting off into the real word is done so with support, knowledge and encouragement. Things were finally going as anticipated. Charlie was supposed to have his third surgery between ages 3-5, but his oxygen levels consistently lowered right before his second birthday.

In the midst of Charlie’s lung condition worsening, we also found ourselves facing divorce and the loss of our home. I often felt like there was a black hole trying to pull us toward despair and away from hope. Our mission, which had been tough before, now seemed impossible. But, with the help of our medical crew, we headed into the darkness equipped with enough light within to blaze the way forward. I wish I could say I lived without doubt or fear, especially after Charlie’s surgeon elaborated on the severity of his condition. If the surgery was successful, it could take months for his oxygen levels to rise. If it wasn’t, Charlie would turn bluer as his condition turned fatal. I remember shaking inside, but smiling outside and thinking how only a surgeon could know a child’s heart anatomy, but only his mother could know its strength. I also wish I could say I consistently and easily gave my son to God, but I didn’t. Accepting my son’s life was (and still is) in God’s hands is no easy task, but it’s where I found how loving someone means letting God. It would only take two weeks and at least a thousand prayers after surgery for Charlie’s oxygen levels to rise appropriately. It was more than a surprise! It was a happy and much welcomed miracle. It still takes a lot of energy and faith to acknowledge our precious existence. We were told my son may never fly, but he soared above earth two months after surgery.

We have been asked to handle the unknown. Charlie’s next surgery and life expectancy are both still uncertain, but then again, we already had enough certainties to reach our destination. I know what the team at Texas Children’s Heart Center knows: Charlie is more than a pediatric heart patient – he’s a blue-eyed, Hot Wheel-racing, frog-catching, pretend fire-fighting, brave heart. I’m certain I will love my son for an eternity, and that the love growing with God’s grace will take us to infinity and beyond.

You can read more about life with a brave heart on our personal blog, and please consider donating to Ronald McDonald House, a place providing the comforts of home to Texas Children’s.

May God’s peace and comfort come to you, and once you’ve experienced it, you can pass it along, too.

“He comforts us in all our troubles so that we can comfort others. When they are troubled, we will be able to give them the same comfort God has given us.” 2 Corinthians 1:4

Cheers to brave hearts and walking fearlessly with God, wherever He may take you.

“Fear not, for I am with you; be not dismayed, for I am your God. I will strengthen you, Yes, I will help you. I will uphold you with My righteous right hand.” Isaiah 41:10