Charlie’s story: 180 days for a second chance in life 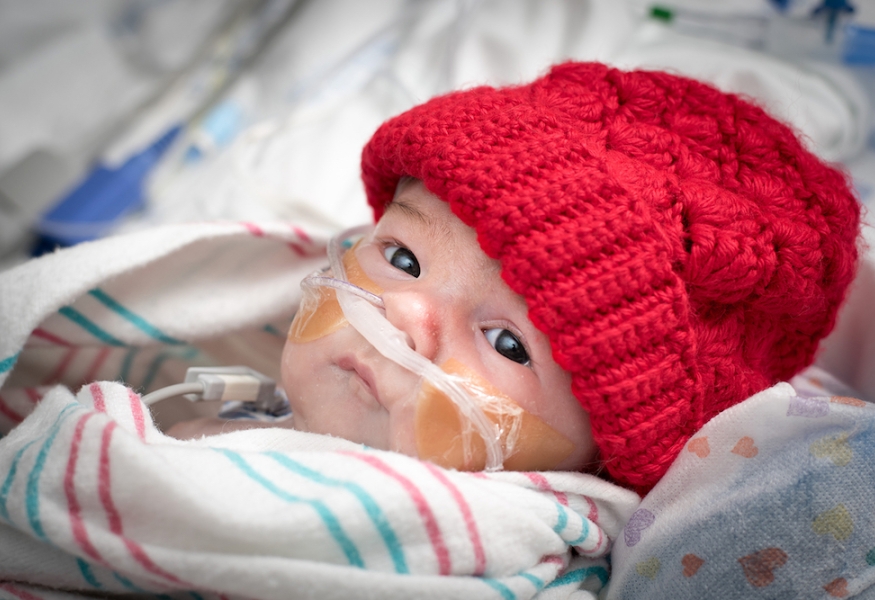 Charles “Charlie” Christopher Dunaway was born at 3:43 a.m. on Dec. 6, 2017, at Ochsner Baptist Medical Center in New Orleans. He weighed 5 pounds, 3 ounces, and was 18.3 inches long. He is named in honor of my wife’s father, Charles “Chiggy” Rhodes, who passed away before her birth in 1976.

Charlie was diagnosed with a pair of congenital heart defects in-utero, including a rare defect called truncus arteriosus and a ventricular septal defect. The first occurs when the two large arteries leaving the heart (the aorta and pulmonary arteries) are combined into one large vessel. The latter is simply a hole in the ventricular septum, or the muscle wall separating the heart’s pumping chambers.

The good news is both of these defects are correctable, but open-heart surgery was necessary. Both issues were addressed in the same operation.

However, two days later Charlie faced a minor setback with his heart function and was immediately transported to the Ochsner Medical Center Cardiovascular Intensive Care Unit.

On Dec. 21, our doctor advised us to transfer to a different facility for treatment, as Ochsner wasn’t equipped with the necessary expertise at the time. We quickly selected Texas Children’s Hospital  in Houston because of their top-ranked congenital heart surgery program and expertise in treating Charlie’s conditions. We also had a good support system with several friends and family members in the area. Our lives were effectively turned upside down, but this was a road we had to travel. There were no alternatives.

Later in the same day, the Kangaroo Crew team from Texas Children’s flew from Houston to New Orleans to collect Charlie. Let me say, it was very emotional for us to watch the son we had barely come to know wheeled out of our hospital room. Charlie and the team landed in Houston a few hours later. The next 24 hours were a whirlwind. We put our lives on hold and drove to Houston.

Shortly after our arrival in Houston, we were informed Charlie’s first corrective surgery (a day-long operation) would take place on Dec. 26. We met with our impressive surgeon, who guided us through his plans like a coach breaking down the Xs and Os of an upcoming basketball game, and we had very few questions once he was finished.

On surgery day, we received an early morning call at 2 a.m. from a doctor who said Charlie had a blood infection. He wasn’t running a temperature and his heart function was normal, but the infection was enough to put the surgery on hold. Charlie’s infection was identified and tackled with antibiotics. It would take weeks for it to clear his body. This turned into a nearly two-month setback.

Meanwhile, Charlie’s biggest issue was too much blood flow to his lungs and not enough for the rest of his body. He was breathing fire and needed intervention before his lungs were permanently damaged. Charlie’s doctors couldn’t do the corrective surgery because of the infection, so they opted to put in a bilateral pulmonary artery band – a short-term fix to restrict blood flow to Charlie’s lungs, which would allow them to heal and begin functioning normally. Surgery number one was in the books. Once the procedure was completed, his blood pressure got a bit better and he started gaining some weight.

Charlie soon faced the second surgery of his young life after the doctors discovered an aortic narrowing that was reducing blood flow and causing a gradient in his blood pressure. They found the narrowing through imaging – technology is pretty amazing. Thankfully, Charlie’s surgery was successful.

During the first week of January, Charlie had his first meal. It was a small meal, but a great start for him since he was previously receiving TPN (imagine baby Gatorade) and lipids. I found it amazing, as a new parent, to stare into my child’s eyes and wonder what he was seeing and thinking. For the first time since arriving to Houston, he was in bed with his eyes open, looking around the room. At one point, he just stared at us. His eyes were focused on our faces and voices. It was quite a moment to experience.

January proved to be a roller coaster for us. They removed all of his breathing assistance at one point but Charlie lost some progress when he had difficulty breathing, so several lines and tubes had to be re-inserted. Charlie’s breathing tube was finally removed on Jan. 23 and we were happy to see it go.

On Feb. 13, Mardi Gras Day in New Orleans, Charlie underwent a full, corrective surgery. It was easily the longest day of our lives. It was a harrowing experience of “hurry up and wait” with reports from the surgical team every hour or so. Finally, following a 12.5-hour surgery, the surgical group entered our meeting room and reported that Charlie was the owner of a newly mended heart. The little guy had gone through the longest day of his young life. But, he made it. It was a day of days for all of us.

Once the surgery was finished, we had a special moment with Charlie’s surgeon, one of the best surgeons in the world as it turns out – Dr. Michiaki Imamura. We met around 11:30 p.m. and he updated us on the procedure. When he was finished, Dr. Imamura looked at us and calmly said, “Thank you for this opportunity.” We were left speechless, but very thankful at the same time. Dr. Imamura will always be our hero. The man stood on his feet for half a day to give Charlie a second chance in life. He and his team were amazing.

We found it ironic that Charlie’s first full day with a new heart was Valentine’s Day. Most kids do get hearts of some kind on Valentine’s Day, right? Only this one was a mended little heart – an updated, whole and functioning heart. Could there be a better gift? Not for this little guy.

Charlie returned to the operating room a few days later for a three-hour procedure. His aorta was putting pressure on his right pulmonary artery, resulting in restricted blood flow. Our surgeon performed the LeCompte maneuver, which corrected the issue successfully. Surgery number four was in the books.

In March and April, Charlie went through withdrawals from pain medications and slowly began receiving less medical assistance. At this point, Aimee was practically living at the hospital while I traveled back and forth from Houston to New Orleans for work. March 30 marked 100 days at Texas Children’s for us.

On May 23, Charlie had a procedure that practically put us on a countdown clock to discharge. We didn’t know the exact date, but for the first time, we could look forward to something. Charlie underwent a gastrointestinal study, and everything appeared normal. Then, he returned to the operating room for a minor procedure to add his feeding tube to his stomach, which would allow us to feed and administer his medications at home.

In early June, we were quickly checking the boxes leading to our departure. Charlie worked with physical and speech therapy, and we soon introduced him to his new car seat. The team eventually removed the majority of Charlie’s support, which was impressive and a good sign he was doing well.

We were finally discharged on June 15, 2018, just two days before Father’s Day. There was no greater Father’s Day present. Following four surgeries, several procedures in the cardiac catheter lab and 177 inpatient days, Charlie was headed home for the first time. We received world-class care at Texas Children’s.

We remained in Houston for three days following our discharge for precautionary reasons, and on June 18, we finally arrived home in New Orleans. Our odyssey with Charlie finally came full circle. Precisely 180 days prior, we departed for Houston with much anxiety and an unclear vision of what the future held for our son. Now, we know. Charlie is a little heart warrior with a second chance in life, and all along we felt like our stay, no matter how long it was, would be a minimal sacrifice to give him a long, normal life.

We owe so many people, especially our surgical team, a debt of gratitude we can never repay, but we promised the surgeon we would give Charlie the best life possible. The nurses and specialists at Texas Children’s were so amazing and caring. We learned that nurses are the closest forms of angels walking among us. There’s a building full of angels at Texas Children’s.

We want to give a big “thanks” to each of our family members and friends who made the journey to Texas Children’s to support us.

We settled in at home and Charlie became accustomed to many of his new specialists, not to mention a new dog, Opie. We finally weaned him off his final narcotic and he was a different baby. We faced a few hiccups along the way with the G-tube, including several trips to the emergency room and another surgery.

Charlie is now larger than 14 pounds and over 2 feet long. He stays busy with appointments to his pediatrician, cardiologist and nutritionist, and he works weekly with his physical and speech therapists. When Charlie’s not working on his development, he’s practicing his favorite routines: smiling, sleeping, eating, pooping and bathing.

Charlie is doing very well, and he’s a very happy baby. He cries like any other infant, but not very often, and he smiles a lot. We’ve been able to take him places and restaurants without meltdowns. He’s just a little dude hanging out and watching the world pass by one day at a time.

We have a pair of nannies to take care of Charlie, and they’ve become an extension of his therapy. He gets a workout daily, which is helping with his overall development.

When we departed Texas Children’s, we didn’t have a plan for taking Charlie off the feeding tube. We worked with occupational therapists for two months, but didn’t see much improvement and were both getting tired of dealing with the tube and pump.

With suggestions and testimonials from two of the families we met during our time at Texas Children’s, we were introduced to a group called Growing Independent Eaters (GIE), which provides families with effective, expert guidance for weaning their children from feeding tubes.

So, we gave it a whirl and joined GIE, and we came away with immediate results. Charlie has now been free of the tube for a month and he’s taking his feeds and medication orally. In fact, we no longer see the speech therapist, either. We graduated. The GIE experience was life-altering for all three of us, but mostly for Charlie. I would highly recommend any family with a baby on a G- or NG tube to look into this group.

Now that we are free of the feeding tube, we’re much more independent and normal. Today, we operate as a typical family with a happy, healthy baby – all thanks to Texas Children’s and the people we met during our time in Houston. Life is good for the Dunaway family. As Charlie goes, we go.

If we can help or offer any advice to anyone reading this entry, please don’t hesitate to contact us at dunaway504@gmail.com.