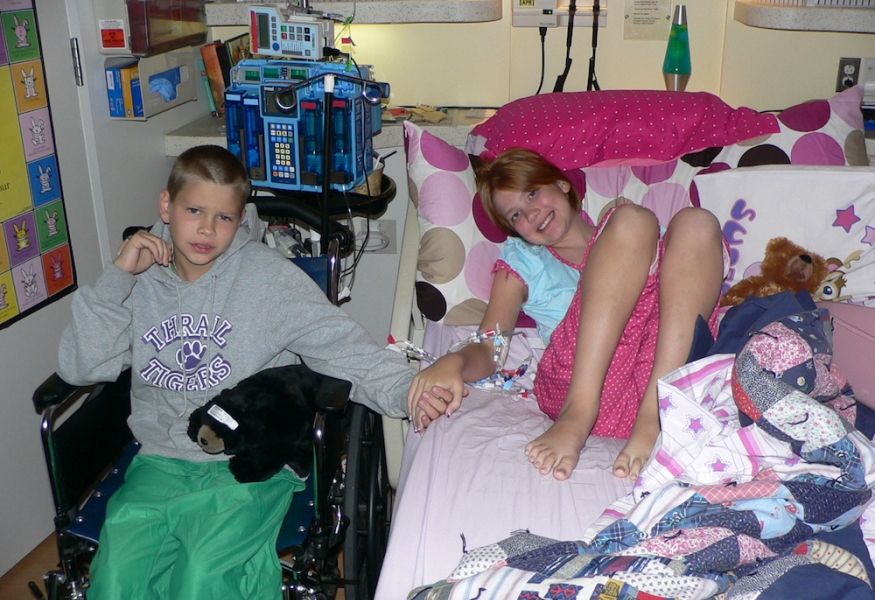 When my pediatrician recommended a complete blood count (CBC) during one of my annual appointments, I was angry because it wasn’t a requirement. I wasn’t any happier when we had to keep returning for additional testing because my counts were low. When this journey started, I remember feeling frustrated after visiting so many different doctors and still not identifying what was wrong. I don’t blame them, though. The condition I was eventually diagnosed with was so rare, and they couldn’t have known.

I saw one doctor in Austin for a few months, and I still had odd blood count numbers and no explanation for them. After a bone marrow aspiration, my doctor told us the results were completely normal. We eventually took the same results to Dr. Donald Mahoney at Texas Children’s Cancer and Hematology Centers in February 2008 for a second opinion.

“What were you told about these results?”

I remember anticipating bad news, primarily from the tone of his voice. He went on to explain that I had myelodysplastic syndrome (MDS) with monosomy seven – an extremely rare type of blood cancer typically found in older men. I was an 11-year-old girl. Dr. Mahoney was surprised I had this disorder, but wasn’t surprised a doctor with less experience wasn’t able to make the diagnosis.

When I heard the word “cancer,” my mind went spinning. I thought of all the people I knew who had died from cancer. But I was already determined to fight and beat this awful disease, with whatever it took. We caught it early enough to avoid symptoms, but knew this wasn’t a question of if I would start going downhill, but when. I needed a bone marrow transplant, or my condition would eventually turn into leukemia.

Rusty and I gathered the family in our living room on Valentine’s Day 2008. This included Caitlin and her three brothers: 12-year-old Cody, 9-year old Colton and 7-year-old Connor. We explained what was happening with Caitlin, and told the boys that each of them could possibly be a bone marrow donor for her. They were very concerned, but each expressed a desire to do whatever was needed to help Caitlin, no matter what.

Caitlin soon underwent another bone marrow aspiration to see if her condition had worsened. It hadn’t, thankfully. She was transferred to Texas Children’s Bone Marrow Transplant Clinic, where the whole family was tested on March 10, 2008, to see if any of us could be a match for Caitlin. We were emotionally drained over the next nine days as we waited for results. A familial match is preferred for bone marrow transplantation, but this doesn’t happen often.

It was overwhelming, in a very positive way, to learn that both Colton and Connor were perfect matches for Caitlin. To our understanding, this is not common. Both boys were willing to donate, but multiple tests were performed to determine whether one boy would be a more compatible match compared to the other. Incredibly, both boys were still equally great matches for Caitlin. The actual donation is somewhat taxing on the donor, so Colton was ultimately chosen because he was older and bigger

We were all probably a bit too young to fully understand the severity of the situation when Caitlin was diagnosed. It all happened so fast. We were never overwhelmingly worried, though. I guess you can call that faith.

We faced a rough summer away from Caitlin and our parents, but we were able to stay with many different friends and family members for a few days or weeks at a time. This strong support group made the whole situation a lot easier on our family. So many people donated their time, money and connections to find ways to help us out and show their support, whether they knew us or not. This taught us the true importance of community. In hindsight, this was an experience that truly bonded our family closer together, even though we were separated for most of it.

Caitlin was admitted to the bone marrow transplant unit (BMTU) on June 17, 2008, to begin an eight-day intensive round of chemotherapy. These few days were indescribable as we watched our seemingly healthy daughter endure the horrible side effects of cancer treatment. I was very nervous and scared, but we knew this was necessary in order to reach our end goal of ultimately saving her life.

We quickly settled into our new home and established a daily routine of meals, television shows and other activities. It was helpful to walk around the BMTU when allowed, and we met so many friendly people and staff members on the unit. We faced some difficult days. Once you’re in the same small room for weeks at a time, it’s easy to become weary, impatient and edgy. Denise and I slept head to foot on a small couch in Caitlin’s room. We were able to talk and spend a lot of quality time together as a family, and we helped each other deal with these feelings.

I was probably most worried about how we would support Caitlin to get her through this ordeal, but her strength was incredible. We continually looked to her for support instead of the other way around. Caitlin’s room was also decorated with her favorite colors and patterns and stocked with games and activities, all thanks to the amazing support from His Grace Foundation, which made the experience better. They even provided an oversized stuffed puppy, which Caitlin named “Bob” after Dr. Robert Krance. To see her face change from scared and concerned to smiling and laughing in that moment was priceless.

The biggest impact on my ability to cope involved placing the entire situation in God’s hands and realizing He was in control with a plan for Caitlin. But what was really amazing to me was how much Caitlin was there for us through this ordeal. I was truly taken aback by the courage and strength our daughter exhibited during her worst moments of pain and discomfort.

Once I was selected as Caitlin’s donor, I went through a bone marrow aspiration. We had to be sure I didn’t have Caitlin’s condition, which is genetic. I didn’t have it, and we were able to proceed with the next steps.

I was very nervous about the transplant. I couldn’t stop thinking about what could go wrong during the night before the surgery. What if Caitlin’s body rejected my bone marrow? I know the doctors said I was a perfect match, but how could I be sure of that? I felt a huge weight on my shoulders, but I decided to talk to God about it. I then realized everything had nothing to do with me, but instead was all in God’s hands.

June 27, 2008, was transplant day, and our loved ones surrounded us. I remember sitting and waiting, trying to keep my mind off it. I have always been a very prideful and tough guy, so I was doing my best to show bravery instead of fear. I was called back at 7:30 a.m. I don’t remember much until after I woke up from the surgery. I had a rough time recovering from the anesthesia, but I didn’t actually get to be with Caitlin while she was getting the transplant.

The transplant began at 11 a.m. and concluded without any issues at all. The day was long and exhausting, but we all knew how blessed we were. We had truly witnessed a miracle firsthand. This experience was extremely special to me once I realized the overwhelming impact God has on our lives. I truly believe the entire journey, from Caitlin’s diagnosis to post-transplant, was a huge display of God’s power and love.

Our family is very blessed, and I’m able to look back on this period of our lives 10 years later with so many emotions. Our faith in God was tested, and I feel each of us grew closer to Him through the process. We’re so thankful for all of the great service, encouragement and support of the staff at Texas Children’s Hospital and volunteers from His Grace Foundation, who all helped our story end on such a positive note. We also can’t express enough gratitude for all of the friends and family members who supported us during this time.

Caitlin graduated with highest honors from Texas State University in December 2017. She just recently started classes to earn her Master’s degree in social work. She was touched by so many amazing people during her bone marrow transplant journey, and wants to give back to others through her career.

Looking back, seeking a second opinion from Texas Children’s Hospital likely saved our daughter’s life. We’re thankful for this every day!

If you could offer hope to someone dying from cancer, would you? In honor of Childhood Cancer Awareness Month and World Marrow Donor Day on Sept. 15, our family urges you to consider registering to become a potential blood stem cell donor. Joining Be the Match® means volunteering to be listed as a potential donor, ready to save the life of any patient in need of a transplant. If you qualify after registering online, you will receive a cheek swab kit in the mail. To learn more about Be the Match® and saving lives through transplant, click here.