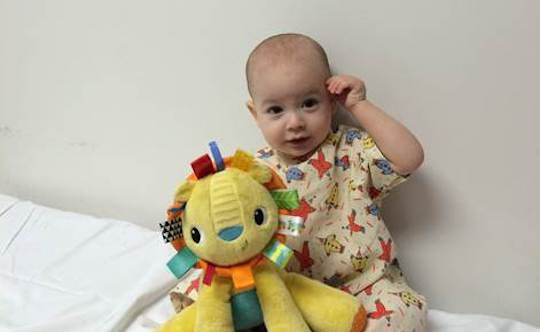 Nov. 20, 2015 … Our cherished baby Andrew lay cradled in my arms for the very first time. Labor and delivery proceeded beautifully and life was as it should be.

The following day, I noticed a small lump just above his right elbow. I made mention of it to our pediatrician who observed its progress over a period of two weeks. After noting significant growth, an X-ray and ultrasound were ordered. The results indicated a possible hemangioma (benign cluster of blood vessels). The first surgeon we visited said it would dissipate on its own and we should return again in six months. My husband and I were uneasy, but the pediatrician reiterated that all of the signs and symptoms were consistent with the diagnosis. 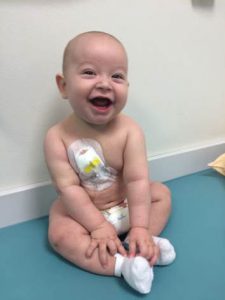 My gut still told me to go for a second opinion, and we found ourselves in the emergency room. Initially the doctor’s impression was still leaning toward a hemangioma. So I asked him, “How do we know that it is NOT a soft tissue sarcoma?”

Puzzled, he asked why I felt that way. I needed to be certain we were obtaining the correct diagnosis. He conveyed to me that the chances of our baby having cancer would be as slim as someone winning the lottery, then decided additional testing was necessary. An MRI was performed and we were then referred to Dr. Mary Brandt who ordered an ultrasound-guided biopsy which ultimately led to his diagnosis. I was asked to come in on Feb. 1, 2016, to speak with Dr. Brandt about the results. She sounded so congenial on the phone that I decided not to ask my husband to join me … He departed to work, my other children spent the day with my mother, and Andrew and I ventured to the medical center alone.

Upon our arrival, Dr. Brandt showed us to a room. I was then introduced to Dr. Wendy Allen-Rhodes…her name tag said “oncology.” I gazed at that word as they delicately explained to me that my 10-week-old baby boy was being diagnosed with cancer (infantile fibrosarcoma). I couldn’t feel anything for a while. I just needed to hear a familiar voice, to have someone in the room help me remember what they were saying. I decided to call my pastor because he was the only person I felt comfortable with relaying this information to over the phone. I placed the call on speaker and we listened together as it was explained that his condition was “very treatable” and he had a “good prognosis.”

Andrew was fitted with a portacath and began a weekly regimen of chemotherapy. After about seven weeks, he started having some nerve related side effects and it was decided to cease the chemo and remove the tumor surgically. The surgery was performed on April 13, 2016 by Dr. Jed Nuchtern who meticulously worked for seven hours to remove the tumor which was entangled in Andrew’s muscle and nerves. In the end, more than 99 percent of the tumor was successfully eradicated! Andrew was immediately able to use his arm, which he demonstrated by playing with his feet! Since the surgery, we have taken Andrew for quarterly exams, which have all been clear.

He is now living a normal, happy and HEALTHY life! Our gratitude for the grace of God, and the staff at Texas Children’s Hospital and the Cancer Center is beyond words!