Our reason to celebrate 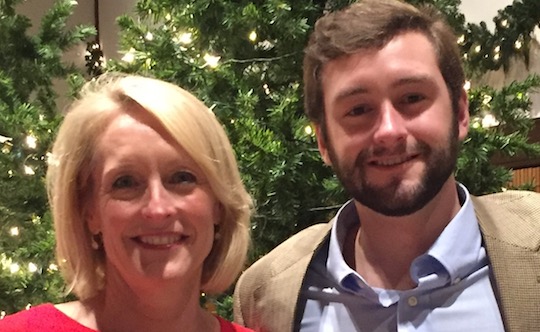 Ten years ago this summer, just before our son Michael began his sophomore year of high school, he was diagnosed with Hodgkin’s Lymphoma. It took months of seeing various specialists to figure out what was causing a seemingly unrelated series of symptoms.

As time passed, Michael’s energy level had dropped so drastically we thought he had a terrible case of mono or allergies, but the test results were all negative. Michael’s wonderful pediatrician, Dr. Danny Danziger at Texas Children’s Pediatrics Piney Point ultimately put it all together and scheduled a simple chest X-ray, which clearly showed a mass in Michael’s chest. Through Dr. Danziger’s affiliation with Texas Children’s, he immediately referred us to Dr. ZoAnn Dreyer at the Cancer Center, where we had an appointment at 8 a.m. the very next day. We were in a bit of shock, but also so relieved to finally have a diagnosis.

It was a Wednesday morning, and we spent the day meeting with Dr. Dreyer, having numerous tests and ending with Michael being admitted to the hospital that night. As hard as this day was, I remember being hugely encouraged when we met a medical student, also named Michael, who had the same diagnosis exactly 10 years prior. The next two days were a flurry of biopsies and having a PIC line placed. That Friday night, we had a meeting with the full team of doctors to discuss his treatment plan. By midnight, Michael was receiving his first dose of chemotherapy.  Where else in the world would that ever happen so quickly? Anyone who knows her already knows, but Dr. Dreyer is simply the best.

The group of radiologists, nurses and staff at Texas Children’s Cancer Center are first-class. I wish I could tell every one of them personally that their kindnesses and care will never be forgotten. Michael is now a proud graduate of the University of Alabama, and working in Houston in the real estate industry. We are blessed.

My family has witnessed firsthand the incredible miracles happening every day at Texas Children’s Cancer Center. The work they are doing is amazing, which is why I have dedicated my time over the years to serve on the advisory board and now, serve on the committee for the 12th annual An Evening with a Legend event honoring Michael Phelps. The evening will be filled with inspiring conversations and offer guests the opportunity to learn about the immense impact Texas Children’s Cancer Center is having in the advancement of pediatric cancer treatment and research - a place that has given families like mine and so many others reasons to celebrate while giving back.

An Evening with a Legend honoring Michael Phelps will be held on May 16, 2017 at the Hilton Americas-Houston. For more information, visit texaschildrens.org/legends.