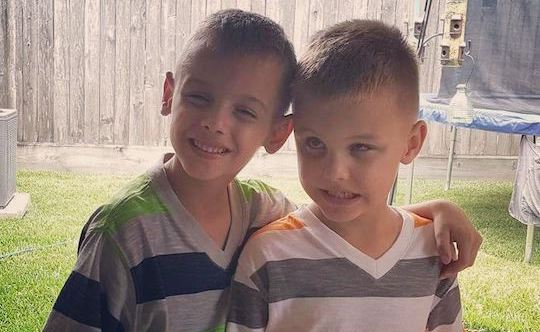 On Jan 15, 2009 (which happened to be my 28th birthday), I had my very first ultrasound for my first pregnancy. While scanning me, the doctor turned the screen and asked if I was ready for an instant family. We were having TWINS! Sheer exhilaration and terror filled our veins.

In my 20th week of pregnancy, my doctor placed me on bed rest due to the possibility of early labor. I went in for an emergency cerclage procedure at 22 weeks and a week and a half later, at just 23 weeks gestation, my water broke.

I was transferred to St. Luke's in the medical center to be closer to Texas Children's because it has a level 4 neonatal intensive care unit (NICU) that can care for babies born very prematurely. After three days of labor and multiple attempts to delay it, I gave birth to Jackson at 11:50 p.m. weighing just 14 ounces. Almost four hours later, Zachary was delivered in his amniotic sac at 3:34 a.m. (yes, they have different birthdays) weighing 1 lb, 2 oz.

The prognosis for both boys being born so early and so small was not good. To quote Dr. Charles Hankins on the boys' first day of life, he said to me and my husband, "we're hopeful, not optimistic." Hearing that will make your heart drop to your feet.

The boys received multiple scans, medications and more blood transfusions that I can count. There was talk of brain bleeds, necrotizing enterocolitis, patent ductus arteriosus (PDA), blood sugar levels, oxygen levels, PICC lines, infections and more. Zachary suffered a grade 1 brain bleed that dissipated back into the brain. Jackson pushed out his breathing tube on more than one occasion and had to be resuscitated almost every time. His PDA gave us a few scares as well, but eventually closed on its own. After their first week of life, Dr. Hankins called me with awe in his tone of how well the boys were doing. Every time the phone rang, I dreaded getting "that" phone call. We knew the boys had a long road ahead of them. Both of them suffered from a disease called retinopathy of prematurity (ROP) of the eyes. They had laser surgery to correct it and were given an 85 percent chance that it would not return. Jackson's eyes remained healthy but Zachary's did not. By the time Zachary was 5 months old, he had already had th

ree retinal surgeries. He has limited vision out of the right eye and no vision in his left eye. The boys spent a total of 154 days in the Texas Children's NICU. We are extremely fortunate to have babies that all in all came out of the hospital with minimal issues. The nurses and doctors at Texas Children's were absolutely wonderful and I am still in contact with some of them today. The boys turned 7 in May, are in the 2nd grade and have a little sister who is 5. We are so thankful to Texas Children's for the care they provided then and continue to provide today.