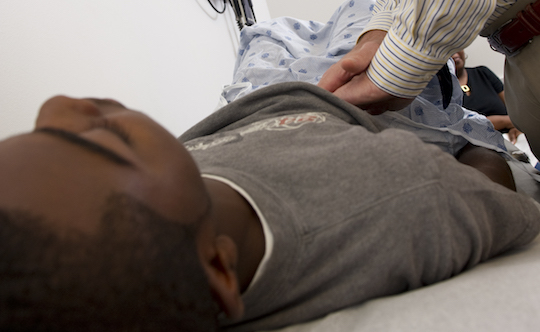 Inflammatory bowel diseases (IBD) are chronic forms of intestinal inflammation where the cause is unknown. There are two major diseases identified within this group of disorders: Crohn’s disease (CD) and ulcerative colitis (UC). These diseases can affect not only the intestines, but other organs as well.

CD is a form of IBD that can affect the intestinal tract from the mouth to the anus, frequently in a patchy fashion. In children, the colon and the last part of the small bowel are most commonly affected. The disease can lead to intestinal complications, such as narrowing of the bowel lumen (the hollow portion of the intestines), holes in the bowel, and fistulas between bowels, or between the bowel and other organs, tissues.

UC affects the inner lining of only the colon. It manifests in connecting ulcerations, which usually begin in the rectum and then spread upwards. In children, about 60 percent of patients present with their whole larbe bowel or colon inflamed.

Standard approaches to the treatment of IBD include medications that are given by mouth, by an intravenous catheter and/or via rectal administration

There are between 60,000 to 90,000 children suffering from IBD in the United States. What many people may not realize is there are two to three times as many children with IBD compared with those with leukemias. Unfortunately, we hear little about IBD, which raises the importance of increasing public awareness about these diseases.

The prevalence of pediatric IBD seems to be continuously rising. We believe children are starting to develop IBD symptoms earlier than before. Unfortunately, we do not know what causes IBD. Current accepted theory is that genetic predisposition and environmental influences lead to poorly regulated immune responses, which leads to chronic inflammation of the intestine. Therefore, IBD is considered to be an autoimmune disease.

There are a number of treatment options for patients with IBD. These include intensive nutritional interventions and a variety of effective medications. Unfortunately, IBD cannot be cured, and medication side effects are of potential concern. Research into the causes of and best treatments for IBD are crucial and will lead to novel preventative and therapeutic options.

As a parent, it’s important to closely monitor the development of your child and alert your pediatrician if you have concerns. Children should be seen regularly by their pediatrician so their growth and development can be closely and consistently monitored. In case of abdominal pain in children, other manifestations, such as diarrhea for more than five to seven days, blood in the stool, weight loss, recurrent fevers and/or rashes, should raise the concern for an underlying chronic intestinal disease.

For children who are diagnosed with IBD, your pediatric gastroenterologist should provide specific information. In addition, useful websites are: