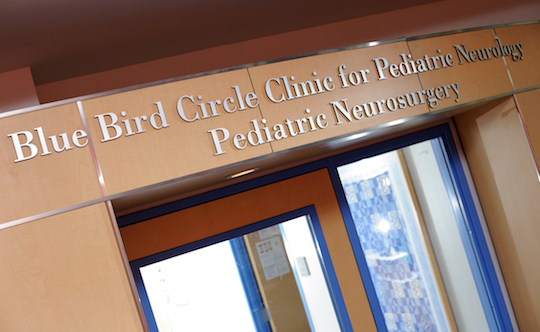 When Matthew was 6 months old and we lived in New Jersey, I noticed he didn’t use his right side very much. He kept his right hand clenched in a fist, never reached out for toys with his right hand, his right eye was slightly droopy and the right corner of his mouth was also droopy.

Since we were about to move to Houston, our pediatrician advised we start the research in our new home. We landed on a Saturday and visited Texas Children’s Blue Bird Circle Clinic that Monday. An MRI revealed a stroke that occurred in utero on the left side of his brain (cerebral palsy). We were told his condition was not degenerative, but they would need to rewire the right side of his brain to assume the duties of the damaged left side.

The diagnosis and treatment plan included lots and lots of therapy. At his maximum, Matthew did three occupation therapies, three physical therapies and three speech therapies each week. We would also repeat the exercises at home.

Our whole family was sad, scared and worried. All of this was shocking and new and we didn’t know if we could trust the diagnosis, but we committed to do anything and everything to help Matthew. We needed to give him tough love and make him try to do things that should have come naturally to him. Only by making him do the hard things would he learn. It was all about repetition.

At 2 years old, Matthew began to have seizures stemming from his brain injury. His seizures were atypical and long lasting. He would stare into space and go deeper and deeper into a trance. They were subtle, peaceful, but very dangerous. Without medical intervention, Matthew would not often come out of his seizures on his own. We had many, many emergency room visits, including some trips in an ambulance. This prolonged seizure activity could cause brain damage over time. Medicine kept the seizures reduced in frequency, but could not keep them away.

Since Matthew’s seizures became his most dangerous side effect from his stroke, we researched the best seizure doctors in the country and found Texas Children’s had some of the best doctors. In December 2011, we checked into the Epilepsy Monitoring Unit (EMU) for one week of seizure activity monitoring. The week showed that Matthew’s seizures all initiated from the damaged left hemisphere before traveling to the right side.

On June 21, 2012, Dr. Daniel Yoshor operated on Matthew. While we were prepared for 12 weeks in the hospital to heal and receive intensive therapy, Matthew was discharged after only 10 days! Matthew hasn’t had another seizure since that day. He is now medicine free and seizure free. Texas Children’s saved Matthew’s life.

Today, Matthew is thriving. He is a freshman and straight-A student. He is a talented golfer and blessed in so many ways. Knowing how much Texas Children’s changed our lives, our family all dedicates time and efforts to the volunteer department at the hospital.

As part of my involvement with volunteering in the EMU, I was asked to get involved with the Family Advisory Team for critical care services. This Family Advisory Team was created to build strong partnerships among health care providers, patients and families at all levels of care to help provide the best possible outcomes and enhance the quality and safety of care. I believe our Family Advisory Team has been instrumental in the planning and design of the new pediatric tower by providing feedback on different topics, including facilities, technology and operational workflows. It has been my pleasure to serve in this role. Thankfully, I have not been the mother of a patient since mid-2012, but I still remember what it feels like and what would have made my stay and Matthew’s stay more positive. I will always offer my help to the hospital that saved my Matthew’s life.