If I can, you can 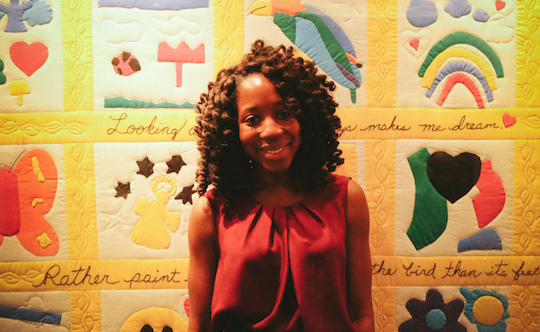 his post was originally shared on Stories from the Center. Copyright of Daniel Wang, 2016 ©.

I grew up in the hospital where I now work...

I am a nurse practitioner at Texas Children's Hospital. I work in the Cancer Center, on the hematology/oncology unit with a specific focus on patients with sickle cell disease (SCD).

I actually grew up here. As in, I grew up in this hospital. I was born with SCD, hemoglobin SS, which is considered to be one of the more severe forms. I remember as a child, my clinicians (Dr. Mahoney and Ms. Ross) would ask me what I wanted to do when I grew up, and I would reply, "I want to be just like you!" Now, those same people I look up to are my co-workers.

... and I also have three siblings with SCD.

As the eldest of five, with other siblings who also have SCD, it wouldn’t be uncommon for me to be in the hospital while a couple of my siblings were there too. It was hard as a child because my mother would come to the hospital and often have to stay with the younger one, leaving me alone during a time when I was not feeling well and wanted the company of loved ones. Now, as an adult looking back, I know it had to be heart breaking seeing your kids in pain and being unable to take their hurt away. Especially knowing they are fighting a lifelong battle.

It's the place where I met the nurse who changed everything...

Nursing is a hard job; it asks a lot of you, you give and give, and people often don't realize how taxing that is.

There was one nurse, however, who was persistent during one of my hospital stays. I wouldn't say much, but she would keep on trying to make me laugh and talk. We had a conversation when I told her I loved Winnie the Pooh, and on her last working day, she came and surprised me with this stuffed Pooh bear and a book because she knew I loved reading. I was touched and completely floored. You're 10 and just want to do what everyone else can do; you want your mom and dad, you feel alone with this disease and don’t know how to talk about it, not to mention you don’t want to burden others either. Yet, here was this person who wouldn't give up. She didn't have to emotionally invest herself, but she did and it made all the difference.

She told me, “You have so much potential, God gave you this battle because he knew you were strong enough to fight it,” and that has served as inspiration to me to this day. Before she left, she said, “You have to promise me that you won't let this break you.” And I told myself, I want to be her, for people like me. She saw a scared little girl, and tried her best; that changed my life.

...and it's where I do the same for my patients.

I met a teenage girl who wouldn't speak to anyone. She wouldn't interact and made her mom do all the talking. I kept pushing because I remembered there was a time when that was me.

All it took was figuring out she was frustrated. She was discussing pain and made some sly comment, the classic, “You don't understand” kind of thing. So I told her I have exactly what she has. She said, “Sickle cell?”

I explained I had been in her shoes… frustrated, in pain. I’ve experienced being angry. More importantly, I told her I made it through. Some kids don't want to keep fighting, they're tired and don't know when it might end. At that point, I say, “You can, you will. If I can, you can.”

A few patients simply need to see someone who has done it, so they can make it. I love that I can give them hope.