In remembrance of Dr. Denton A. Cooley | Texas Children's Hospital

In remembrance of Dr. Denton A. Cooley 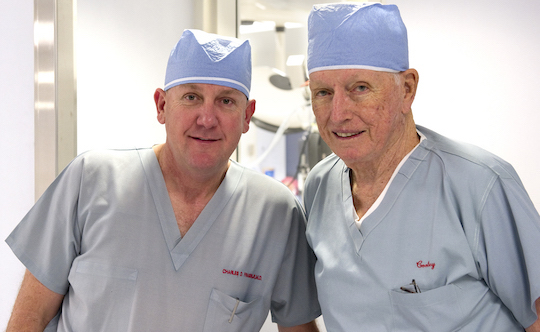 Dr. Denton A. Cooley passed away last Friday, Nov. 18, 2016, at the age of 96. Dr. Cooley was a legendary surgeon with an immense impact on medicine and surgery. He was a devoted husband, father, grandfather and great-grandfather. Dr. Cooley was a tremendous friend, colleague, trusted-advisor, and I was blessed to be his son-in-law. I already feel his absence, even as I see his impact everywhere I look, from his resemblance in my own adult children’s faces, to the operative techniques he developed.

Denton Cooley was one of history’s most influential physicians. He remains, to this day, a household name in our country and around the world. His skills as a surgeon were widely respected and emulated. After observing Dr. Cooley perform a coronary bypass procedure to reconstruct the heart’s arterial system, Dr. Christiaan Barnard (who performed the world’s first heart transplant) said, “It was the most beautiful surgery I had ever seen…every moment had purpose and aim…no one in the world, I knew, could equal it.”

I am humbled as I reflect on the significant milestones Dr. Cooley achieved in cardiovascular surgery. To name just a few:

Texas Children’s Hospital owes much to Dr. Cooley who served as our first chief of cardiovascular surgery and remained committed to pediatric heart surgery throughout his life. As a surgical intern at The Johns Hopkins Hospital, Dr. Cooley assisted in the first Blalock-Taussig procedure to treat “blue babies.” Dr. Cooley said of that surgery, “I felt like that was the dawn of modern heart surgery. I felt it a privilege to not only be a witness, but a participant in that historic event.”

Dr. Cooley continued to lead innovations in pediatric heart surgery here at Texas Children’s. In 1984, he performed the world’s first successful infant heart transplant on young Sara Remington. The operative techniques he developed to perform this transplant are still being used today.

I was privileged to succeed Dr. Cooley as chief of pediatric heart surgery at Texas Children’s in 1995. He continued to be surgically active in our program until 1997. He remained closely interested in our work throughout his life.

Building on Dr. Cooley’s legacy, our dedicated pediatric and congenital heart surgery program has completed over 14,000 operations since 1995. Recently, our team completed our 10,000th case using the heart-lung bypass machine, quite a milestone for our program. Dr. Cooley reminded me that he and his team completed over 100,000 such cases! In fact, in Houston, we believe we may have more adults living with congenital heart disease than many other cities due to the “Cooley effect.” Dr. Cooley’s operations saved lives at a time when those living in other parts of the country may not have had the benefit of his pioneering work.

Despite his rigorous professional schedule, Dr. Cooley’s family life was critically important to him. He once said he had two “firsts” in his life: his patients and his family. He is survived by his daughters, Mary, Susan, Louise (Weezie) and Helen, as well as 28 grandchildren and spouses, 16 great-grandchildren and more on the way. He was preceded in death by his wife, Louise, and his daughter Florence.

One of his greatest lasting legacies is the Texas Heart Institute, an organization devoted to cardiovascular surgery, as well as research and education, which he founded in 1962 and served as president emeritus.

Dr. Cooley was also a prolific writer, publishing more than 1,400 journal articles and 12 medical textbooks. His autobiography, “100,000 Hearts: A Surgeon’s Memoir,” is a must read for the medical profession and lay public.

Dr. Cooley’s accomplishments were numerous and resulted in him receiving many honors, awards and accolades. President Ronald Regan honored him in 1984 with the highest civilian award in the U.S., the National Medal of Freedom, for his contributions to the field of medical science. President William “Bill” Clinton presented him with the National Medal of Technology – the highest honor for technological innovation in the U.S. – in 1998. The International Surgical Society awarded him the René Leriche prize, which is its highest honor, in 1967 calling him “the most valuable surgeon of the heart and blood vessels anywhere in the world.”

Of all the honors he received, the one that most clearly epitomizes the respect in which he was held by his colleagues is the Denton A. Cooley Cardiovascular Surgical Society that was founded by his fellows and residents as a tribute to his contributions to physician education, professional growth and progress. The society selected as its motto, Dr. Cooley’s personal philosophy: Modify. Simplify. Apply.

One of Dr. Cooley’s favorite poems was “The Bag of Tools” by R. L. Sharpe:

Isn't it strange
That princes and kings,
And clowns that caper
In sawdust rings,
And common people
Like you and me
Are builders for eternity?
Each is given a bag of tools,
A shapeless mass
A book of rules;
And each must make
Ere life has flown
A stumbling block
Or a stepping stone.

Dr. Cooley used every innate “tool” he was given to be an innovator and teacher who inspired generations of physicians. He will be remembered as a surgeon of extraordinary skill and vision, and as a beloved husband, father, grandfather and great-grandfather.