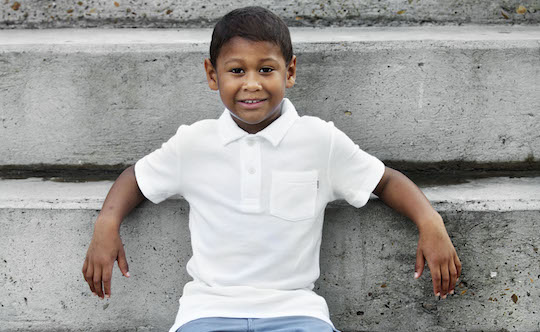 On July 6, 1995, a month before my fifth birthday, I was diagnosed with leukemia. I was 4 years old and had no idea what was happening to me. My mother, who was 22 at the time, was young and yet very strong to be going through something like this with her first child.

I had been getting sick and having a fever a lot more often. I was rushed to the local hospital. My blood counts were so messed up and the nurses thought I had been in an accident and was bleeding internally. My pediatrician, Dr. .J.J. Saenz, who is now the doctor for my three children, was called in and immediately had me flown to Texas Children's Hospital.

Texas Children’s confirmed my diagnosis of B-cell leukemia. It was a very scary time for my family because they knew I might not make it. I was extremely sick and it was a constant back-and-forth from Edinburg (where we lived) to Houston. Dr. C. Stueber, along with a great team of doctors, kept me going and alive. There were a few times they told my mother I wasn't going to make it. I lived, got married and have beautiful children of my own.

Unfortunately, my oldest, Andre, was diagnosed with leukemia on July 8, 2015. A month before this he had a fever and a very random eye infection. We went to Dr. J.J. Saenz’s office where my son saw Mr. Anzaldua, a physician assistant, who did a blood smear and realized his blood cells where very abnormal. We were then referred to Dr. Bernini at the Vannie E. Cook Jr. Children’s Cancer and Hematology Clinic in McAllen, Texas. At first, they thought Andre had a vitamin deficiency, but Dr. Bernini did the flow cytometry and found 75 percent leukemia blasts. My husband and I were called in – or more like rushed – into his office on July 8 and he told us Andre had cancer. I’ve never been so devastated; to know my son would have to go through something I would never wish on anyone. I was so scared; I kept thinking the worst. That same night we were rushed to the hospital where Andre was scheduled for a bone marrow aspirate and a placement of a port-a-cath.

Throughout his journey I saw my son suffer from an infected port, to receiving a wound VAC twice, to having another surgery on his foot from a growth that needed to be removed. I witnessed my 4 year old suffer and scream from changing and cleaning wounds on his chest and his foot. Having IV antibiotics at home from repeated infections. The one great thing I can say is that through all this my son never lost his spirit. He is one of the most positive and strongest people I know. Because of him smiling and laughing I kept going and kept strong. The whole time I blamed myself for letting this happen to Andre. I thought because I had cancer it was somehow genetically passed down to him. I was angry and bitter for months and just didn't want to accept the situation. After finally accepting this tragedy happened to not only me, but my son and family, I realized maybe this wasn't a tragedy, but a blessing to give others hope and to have faith. My son is now in remission and is more active than ever. His appetite is big, just like his heart. Every time he prays he never ends the prayer without asking God to help the kids in the hospital get better. I believe we were given a gift to help others keep faith and see that we all can overcome what we think is the worst. This has made us both stronger and grateful to be alive and well.