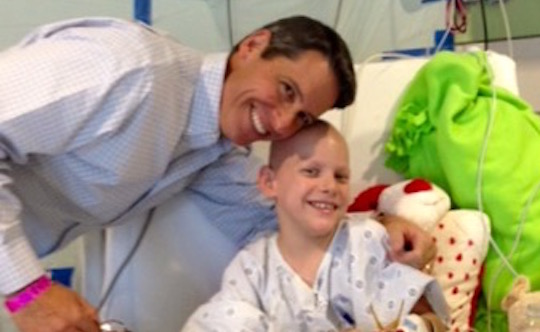 Every Friday during National Childhood Cancer Awareness Month we will be sharing Patrick’s journey.

“A cancer of the nervous system” the doctor stated.

My mind raced and my heart felt sick with fear. Patrick was just 9 years old.

When I say Patrick’s cancer was severe, words don’t do it justice. He had tumors all along his spine, 100 percent cancer cells in the marrow and cancer in the bone from the top of his skull down to his legs. He was in for an incomprehensibly difficult and trying battle.

Early in Patrick’s treatment he was facing a particularly difficult day (all days are difficult, some more than others… his new normal). My husband, Chris, was in the room with him. He could see Patrick was troubled and didn’t look his usual happy self. Chris moved to sit on his bed and asked, “Patrick, what does it mean to have courage?” Patrick replied, “To not be afraid.” His dad said, “No, it means knowing what you need to do, fearing the possibilities, but still deciding to overcome your fear and doing what needs to be done. Everyone who shows courage is afraid. Afraid of pain and the unknown. Courage is knowing you are afraid of something you need to do and choosing to do it anyway. That’s why you are my Captain Courageous. Because you have the courage to overcome your fear and face what you need to do.”

At that moment Captain Courageous was born. It was a persona Patrick would carry with him throughout his journey with cancer. To his family, he became our Captain Courageous and he would need to be courageous too! Many of the therapies he would endure were frightening and painful. Yet, Patrick faced each milestone with a positive attitude and an ever present smile. Patrick also encouraged other children to be courageous. The nurses would share with us his concern for the other children in the playroom. He would assure them everything was going to be OK and he would tell them he would be praying for them. Frequently, he was overheard recommending the best Gatorade in which to mix their medications. That’s our Captain Courageous!

Patrick’s journey began with numerous rounds of chemotherapy. It was necessary to shrink the tumors as much as possible. His doctors then recommended MIBG radiation therapy. This promising study drug specifically targets the neuroblastoma tumors and delivers radiation to the cancer cells to destroy them. We were warned of the difficulty of this therapy. It can be very painful. His cancer was of the nervous system, so the pain can be unbearable. Just imagine all the nerve endings in his little body being inflamed! Many children must be sedated to endure it. When the moment came to begin the infusion, Patrick could see the worry that was weighing me down. My ever positive Captain Courageous looked at me and said, “Stop worrying about me, Mom. It’s going to be fine.” That’s our Captain Courageous!

Patrick took MIBG on with a smile. God protected him from the worst of the pain and he thought it was great to go the required three days without a bath or even brushing his teeth! He also got to eat all the sour candy he wanted (Captain Courageous’ power source). In the middle of this nightmare it was a little boy’s dream come true!

Patrick endured two rounds of this difficult therapy. The first round resulted in a significant reduction in cancer. Unfortunately, no benefit was received from the second round.

Surgery was ordered to remove the remaining tumor. While recovering from surgery, Patrick’s lung collapsed. Our little boy was very ill. Simply making the effort to blow into a tube or take a short walk was challenging. But, Captain Courageous pulled through by doing what needed to be done.

After his recovery from surgery, targeted radiation was ordered. I wasn’t allowed in the room with him when the lasers were in use. I hugged and kissed him. He was frightened and I reminded him he is my Captain Courageous and he tried to muster up that smile. I walked out into the waiting room, bowed my head, prayed and cried. Some days it wasn’t easy to be the mother of Captain Courageous.

Stem cell transplant was next on Patrick’s roadmap. He would need to be Captain Courageous to get through this. With stem cell transplant, it is necessary to destroy the bone marrow (immune system) in order to rebuild it. The high-dose chemo was completely debilitating. He had to fight hard to make his way back from this completely devastating procedure. I felt an overwhelming sense of helplessness because he was so ill. The best I could do for him was to pray, hold him, and to love him through it. Some days are easier than others to be Captain Courageous.

Unfortunately, Patrick’s cancer remained after stem cell transplant. With no other good options available, his oncologist then made a Plea of Compassionate Use to the Food and Drug Administration (FDA) for a study drug called CH 14.18. This experimental drug is a type of antibody therapy that targets cancer cells and destroys them. Approval from the FDA was granted. Once again, Captain Courageous was facing a painful therapy.

At long last, his cancer relented. Following the therapy, scans revealed he had no evidence of disease. He did it! Captain Courageous won the battle! With his expert oncologists Dr. Wendy-Allen-Rhoades and Dr. Crystal Lewis leading him to safety, he defeated the enemy! And he defeated it with that ever present Captain Courageous smile!