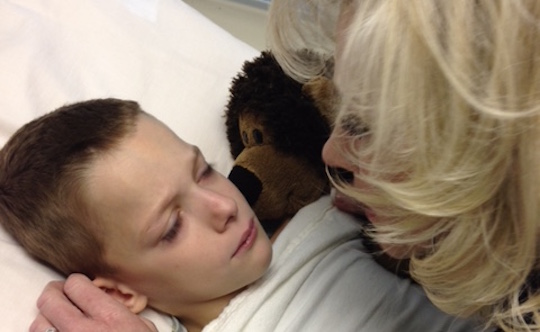 Every Friday during National Childhood Cancer Awareness Month we will be sharing Patrick’s journey.

It was cold outside on Nov. 26, 2012. It was a long day for me. My daughter and I spent a few days in California together and the flight home was long and exhausting. Arriving home at 5 p.m., I spent a few minutes with my other children. By 6 p.m., I was back in my car making the drive to Texas Children’s Hospital. Patrick was scheduled for an MRI at 7 p.m. that evening.

For many months Patrick had exhibited strange symptoms that the pediatrician couldn’t diagnose. Now, at Texas Children’s, we were seeing specialists in search of answers. It was late when Patrick and I returned home. After his bath, we proceeded with our normal routine. We prayed, I kissed him goodnight and then tucked him into bed.

Although exhausted, I was too keyed up from the day to sleep. I grabbed one of our small ottomans and positioned it in front of the fireplace. Warming myself by the fire, I reflected on Patrick, the past few days with my daughter, the work I needed to catch up on at the office and the passing of my father on this date in 2000.

It was midnight when the phone rang. On the other line was a doctor from Texas Children’s. She said, “Mrs. DeClaire, this is Dr. Sartain from Texas Children’s Hospital. We have found a tumor into Patrick’s spine. It may cause him to become paralyzed at any moment. We need you to bring him back to the hospital. We may need to start chemo tonight.” I went into shock.  I had been worried about Patrick for almost a year, but a tumor?

My husband was overseas at the time. We spoke briefly on the phone and he immediately initiated arrangements to catch the next flight home. I then called my mother to come over and take care of Patrick’s twin brother, Trent.

I rushed Patrick to the ER. The hours that followed comprise the most difficult 48 hours of my life. Patrick was cared for by a number of doctors, endured numerous tests and was sent into surgery to biopsy the tumor. I struggled to hide the tears and fear that gripped me while I anxiously waited for the doctors to determine if the tumor was active, and to provide me a diagnosis.

In the months leading up to Patrick’s diagnosis, I had been in and out of the pediatrician’s office looking for answers. I was told he had a virus or that he was just getting over a virus. I was told it was growing pains or perhaps an exaggeration due to an emotional need. At one point I asked her to please X-ray him. After doing an ultrasound and blood work, she said there was nothing wrong with him. The last time I saw the pediatrician, I told her I thought she was missing something. She looked at me and said words that are forever etched into my memory. She said, “You journal and I’ll think.” A couple of weeks later Patrick had another “episode.” A different pediatrician was working on that Saturday morning. Fearing spinal meningitis, he sent Patrick to the hospital for tests. That evening he called to say something was definitely wrong with our son. He was very anemic, and not because of an iron deficiency. On Monday morning the doctor made a referral for Patrick to be seen at Texas Children’s.

Nothing prepares you for the moment when you are told your child is critically ill with a life-threatening illness. Unimaginable fear overtakes you when a doctor uses the word “cancer.” Even if you know in your heart, the shock is still all-consuming!

In the weeks and months that followed his diagnosis, our family had to adjust to a new normal.  The doctors and nurses at the Cancer Center helped to make that difficult transition easier.  They taught us the new language of cancer and helped us to manage expectations. We were a part of a new family now. Our new family included amazing oncologists like Dr. Wendy Allen-Rhoades, Dr. Crystal Louis and neurosurgeon, Dr. Jed Nuchtern. The ninth floor of the West Tower became our new home and the wonderful nursing staff and child life specialists there completed our new family dynamic.

As I write this blog, my heart aches and I would like to impart to young pediatricians my thoughts as a result of my experience. You are going to see many patients. The majority of them look just alike. Virus after virus will be diagnosed. However, I challenge you to be on the lookout for the zebra in the room; that is, the one child that doesn’t appear to be like all the rest. If you do that, you might just find yourself in the position of saving a child’s life. Also, please listen to your patient’s parents. There is something to mother’s intuition.

Finally, to the many parents out there who have a nagging concern, follow your instincts. If you feel there is something wrong with your child, there most likely is a problem. Patrick’s cancer might have been diagnosed sooner if I had trusted myself more than I trusted his doctor.  Our skill set is something that isn’t learned. It is not scientific. It is simply God-given!

I no longer question my instincts. At Texas Children’s the doctors include the parents as part of the team. They rely on us to report any changes we see in our child or reactions to medications.  We rely on them for their knowledge, skills and healing. My son’s life was saved by his oncologists and for that, I am eternally grateful!