We are all busy bees: Tips for managing your toddler and preschooler during social distancing
Top 10 tips for supporting your child with autism during COVID-19
Supporting your child’s development through daily mindfulness-based activities
Social distancing at home? Educational tips to help keep your kids occupied
4 tips to use when you talk to your kids about COVID-19 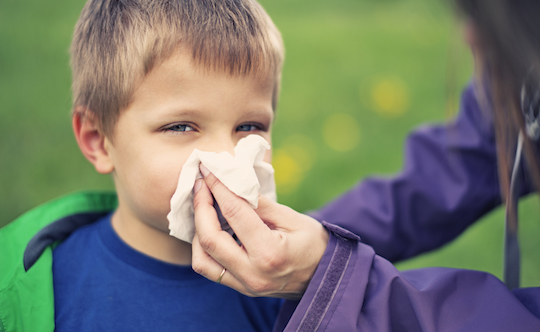 Bleeding from the nose (epistaxis) is a common complaint in children. It can be quite stressful for a parent to see their child bleeding even though bleeding stops with pressure alone in many cases.

Why do children bleed from their noses?
Bleeding from the nose in children commonly occurs from the anterior part of the nose called the nasal septum. This part of the nose has a big plexus of blood vessels and is very vascular. Bleeding may start spontaneously or after minor trauma. In a majority of children the bleeding stops with pressure within several minutes. In a small minority, bleeding may occur as clots and may last for about 30 to 40 minutes. This is usually seen in older children. Family history of nose bleeds may be present.

Exam of the nose may be normal or show signs of recent bleeding in the form of a small blood clot or scab in the front part of the nasal cavity. The blood vessel causing the issue may also be seen. There may be associated signs of nasal allergies. A good history and physical exam of the nose usually helps to rule out more complex causes of nose bleeds, such as bleeding or clotting disorders, benign tumors of the nose and other familial conditions.

How are nose bleeds treated?
The majority of patients will respond to saline sprays and Vaseline or topical antibiotic ointment. Vaseline ointment helps prevent the nose from getting too dry. It is usually recommended that Vaseline ointment be applied two times every day. Sometimes a small procedure may be performed during an office visit which is called as cauterization. It is essentially chemically burning the offending blood vessel with a compound called silver nitrate. In some cases, more than one cauterization may be required. If blood vessels are seen on both sides, usually only one side is cauterized at a time. A small minority of patients continue to bleed despite these measures. These patients may benefit from cauterization in the operating room with suction bovie under anesthesia.