Texas Children’s Celebrates 10th Anniversary of its Medical Legal Partnership
Third time’s a charm
It was worth every mile
Five Years of Seizure-Free Living, Thanks to Texas Children’s
Fall and Winter Wellness

Working toward my dream 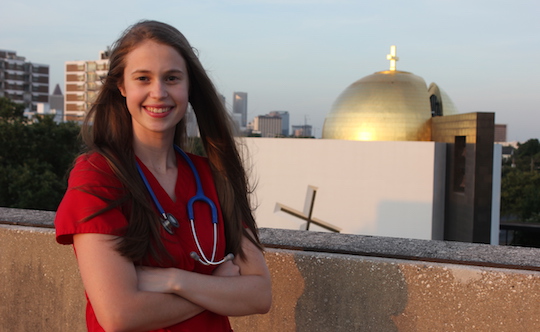 In the beginning of February 2009, while practicing for the U.S. Junior Olympics in Tae-kwon-do, I became injured during conditioning training and didn’t overcome the injury. In the days following my injury, I began feeling unusually tired, but I continued to push myself. A few days later I discovered tiny red dots on the back of my wrist.After visiting five different doctors, a dermatologist sent me immediately for blood tests. After the nurse obtained the blood samples to test, we went home. After a long day of trying to find an answer to my physical condition, my family and I went to sleep. My mother later was disturbed by my cat. My cat bit her for no apparent reason. This was the first time my cat had ever bitten anyone in the 10 years with our family. Then, a few minutes later, ring! ring! Our phone rang; it was four in the morning. My mother picked up the phone and the dermatologist told her to take me to the hospital immediately because my platelets were at a total of six and I could spontaneously bleed to death at any moment. If my cat had not bitten my mother, she would have never heard the phone ring.

I was placed in two hospitals in 24 hours; I arrived at Texas Children’s Hospital not knowing what was happening. After being placed in room number one on the ninth floor of the West Tower; we waited for answers. Finally the doctors arrived and took my parents outside of the room to talk about the results of the blood samples. After what seemed to be forever, my parents and the doctors returned to my room to discuss my condition with me. They told us I had cancer, Acute Lymphoblastic Leukemia (ALL).  After 10 days of intensive chemotherapy resulting in almost no immune system, they told me I could return home. My ANC (immune system level) was at a total of zero. At home, being already very weak and having constant pain, I had a lot of trouble getting up, walking and basically living each day. A few days later, I suddenly had a fever and an ambulance rushed me back to the hospital. We returned to the hospital and did numerous types of tests to determine what caused the fever. The doctors concluded I had an uncommon type of fungal infection known as Fusarium, which was eating away at me from the inside. My blood was full of this fungus. I also had fungal growths in and on my lungs and kidneys, left eye and skin lesions. Due to the fungal infection, I had to endure four surgeries in my nose, 18 eye injections while awake and eight eye surgeries on my left eye.

Through my experiences with cancer, a fungal infection and having survived through two-and-a-half years of chemotherapy, I became inspired to be a pediatric oncology nurse. I have decided to pursue this dream career because I want to give the children, adolescents and their families hope that they can win their battle against cancer. I believe I can help others through the challenges they will face. My dream is to offer cancer patients motivation to continue their difficult fight against cancer. I want patients to realize there is a light at the end of the tunnel and they are not just a “cancer kid,” but someone special who can also fulfill their dreams. I hope to actualize my dream career at Texas Children’s on the ninth floor of the West tower, where I won my battle.