A different perspective on wait times 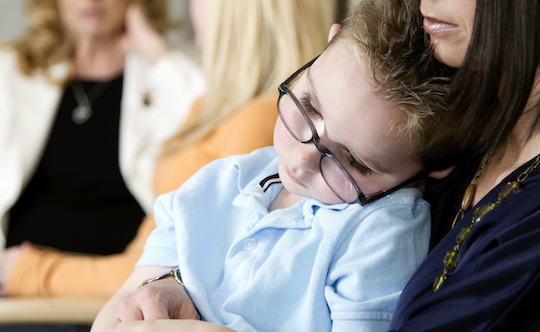 Let’s face it. No one wants to be in a doctor’s office. You’re either there with a healthy child who is bouncing off the walls and anxious about a vaccination, or you’re there with a child who is sick and just wants to be lying down, cuddling with mom or dad on the sofa. And there’s nothing worse than having long waits to see the doctor. Or is there? Last week I was at yet another appointment when a lady walked in carrying her baby. The waiting room was nearly empty, just me, my son and another dad and his child. It was easy to overhear the entire conversation she had with the receptionist. She wanted to know what steps she needed to take to get her children’s medical records sent to another pediatrician’s office. She was tired of the long waits at this office. She explained that during her last visit she waited 45 minutes and her time was too valuable to waste. While obviously frustrated with the situation, this lady was still polite and I do not mean to be dismissive of her concerns. The receptionist handled the situation very professionally. She was polite, never defensive, apologetic and even made sure the lady had no issues with the care her children received and that she’d had ample time to discuss any concerns with the doctor. But it was what she said next that caught my attention. “There is no reason any parent should need more than 10-15 minutes with the doctor, so how do they get so far behind?” To this the receptionist had no answers, but I did. I was debating answering the question when the nurse called us back for our appointment. I’ve regretted it ever since. That one statement told me so much about her. Her children were relatively healthy. She’d never had a doctor’s appointment with a 2-year-old and 1-year-old struggling to breathe due to pneumonia and needing breathing treatments and hospitalizations. She’d never had a doctor explain her child needed to see specialists because there may be a problem. She’d never looked in the doctor’s eyes while being told her child had a brain tumor, cancer, or chronic health issues. She never had to ask question after question about surgeries a doctor was recommending. She never had a child rushed to the emergency room and admitted to the hospital because something as simple as strep put their life in jeopardy. I never complain about long waits at the doctor’s office. Not anymore. Instead, I am grateful to be seeing a doctor willing to spend the time necessary to correctly diagnose a child and answer questions of a concerned parent. I’m grateful for all the times a doctor has spent extra time with my child to make sure he is OK. I think of the times when a doctor has worked my son in between scheduled appointments even though it was going to mess up his or her schedule for the rest of the day. I’ve listened to the apology given by a doctor for being late because the child in front of us had stopped breathing and had to be rushed to the hospital. While sitting in the waiting room my mind isn’t on the clock, it’s thinking about the parents who needed extra time with the doctor that day and hoping their children are OK. If you are a parent who thinks there is no reason an appointment should take more than 10-15 minutes… stop and take a moment to be thankful your children are healthy.
Author
Amy Peterson, mother of patient