Two stacks: a chance meeting in the hospital halls 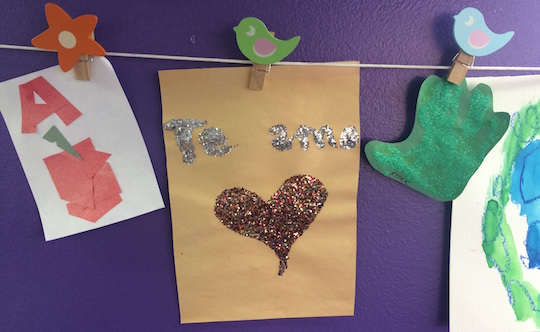 The little silver key was always kept in a small wooden box on a desk. Almost always.

On this day the key to the closet of extra toys and art supplies was missing and the closet was locked. It meant I couldn’t get the supplies I wanted. It meant I’d have to come back another day.

It was just as well. I was late. Had I gotten into the closet and started packing supplies into the little red wagon accompanying me, I would have been late leaving work and late to pick up my daughters. I headed back across Texas Children’s to my office.

I returned to the West Tower 9th floor just in time to see them peering through the window of the darkened playroom. They were just turning to leave as I walked up with my empty wagon. “May I help you?” I asked the young couple.

I remember the woman’s beautiful summertime dress and how it matched her purse. She wore high heels. Her dark hair was straight and just below her shoulders. The man with her was dressed sharply, too. His phone rang as I approached. He answered and became preoccupied.

The woman asked me about the playroom, filled with toys and tables where pediatric cancer patients played and crafted as they navigated IV poles with parents in tow protecting lines and ports.

The woman knew the room well, she told me. She had played there often with her toddler son while he spent some time at Texas Children’s. The day I met her she was visiting a friend on the floor and then flying back to her home in Mexico. She was wondering if I knew anything about the art on the walls in the playroom.

At the time I was the new child life activity coordinator for the Cancer and Hematology Centers. One of my responsibilities included creating a fun, bright, safe space for patients and programming.

When I began building that space there was a lot of old patient artwork on the walls. Most of it was taped haphazardly in various places: colored pages of Ariel and Batman here, cardboard robots and paper bag puppets there. The majority was wrinkled and faded from a lengthy stint on a wall across from large windows and the unforgiving Houston sun. There was an oversized folder I used to save some of the old artwork as I made room for the new.

I started by taking down everything. Most of it was dated and almost a year old. There was not nearly enough space in the folder for it all-- only a small handful would fit. I began making two stacks. One to keep, one to discard. I started sorting. There was not a tremendous amount of rhyme or reason to which work fell into each stack. A lot of it was comprised of random paint strokes or crayon lines.

The woman told me she thought she left some of her son’s artwork on the playroom wall and forgotten it when they departed the hospital. It had been quite a while back, she said. I thought of my two stacks.

We stepped into the dark playroom together and I pulled out the oversized folder. I asked her to look with me. I starting laying out papers for her to see. We were halfway through the folder when she saw it.

“That’s it,” I remember her saying. She had the most beautiful smile on her face.

In my hand I held a wrinkled, faded piece of construction paper. On it were two little dried, painted handprints. In big bold letters was her son's name.

She started crying. She held this wrinkled, faded piece of construction paper in her hands and wept.

I think she said, “I can’t believe it” or maybe the words were just ringing in my own head. I don’t recall. There was more artwork left in the folder. I continued pulling out other pages and she reached out for another one. A second one.

“He will be 3 years old,” she said through tears and a smile. I remember those exact words and her bright, tearful eyes very clearly because she spoke as if her son were there with us. I didn’t say a word. She reached out for the second page and for a moment I held one side while she held the other. She told me thank you and then thank you again. I showed her out of the playroom door and she walked away.

I stood in the dark playroom and thought about the missing key and how it returned me to the playroom just in time to find this mother. I thought how the room embodied so much more than play. Paint, paper and my projects with patients – they would forever foster even greater importance. With every creation I would think of this chance meeting in the hospital halls and foresee a destination for our work.

I thought about my two stacks and how not one but two pages of her son’s artwork landed miraculously in the keep pile.

I thought how unworthy, but privileged, I felt to hold that old piece of paper; sharing a corner of it for just a moment with the mother of a child I never knew. A child who will continue to age in his mother’s heart while his tiny handprints remain eternal, perfectly pressed on that wrinkled little page.

To read this blog in Spanish, visit here.