Shoot for savory - not salty! 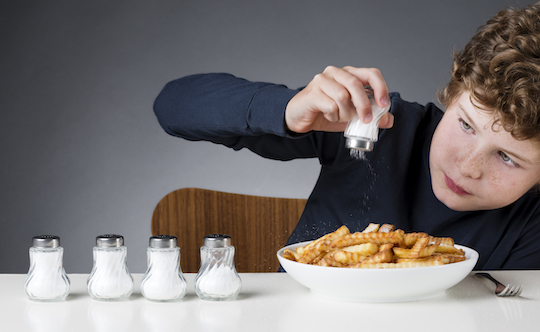 National Nutrition Month is focusing on savoring the flavors of food this year. We all want flavorful meals, which is easy to achieve while also limiting things like salt, the main contributor of sodium in the American diet.

The USDA Dietary Guidelines recommends a daily sodium intake of less than 2,300 milligrams (mg) for the general population and an intake less than 1,500 mg for those older than 51, or those with certain medical conditions. For children aged 1 to 8, the recommendation is between 1,500 to 1,900 mg daily. It’s frightening that the average American aged 2 and older consumes more than 3,400 mg of sodium a day!

Did you know that approximately 75 percent of daily sodium intake comes from processed foods and/or restaurant foods? This makes it difficult for consumers to maintain a diet with a low or reasonable amount of sodium.

As a resource, the American Heart Association has developed a list of “the salty six,” food items/categories that contribute significant amounts of salt to the diet, most of them being popular among children and adolescents. This list includes breads, deli meats, pizza, poultry, soups and sandwiches.

Reducing sodium intake doesn't have to mean eliminating favorite foods. Below are some tricks for reducing salt, and thus sodium, in the diet:

Seasonings: Individual seasonings such as garlic, ginger or red pepper can add flavor and/or heat. Spice companies offer salt-free spice blends (Salt-free Mrs. Dash, Tony Chachere’s Salt-free, etc.) which can be used to enhance taste while limiting sodium. Be careful when looking at products like low-sodium sea salt as many options only reduce sodium minimally, leaving the final product still relatively high. Additional flavor-enhancing options include lemon and lime juice and other forms of citrus, as well as various types of vinegar. Don’t forget fresh herbs like basil and mint, that pack a flavorful punch!

Condiments: One tablespoon of ketchup provides about 150 mg of sodium. No-salt ketchup is a suitable alternative. Yellow mustard is relatively low in sodium (55 mg), as is mayonnaise, when used in a one tablespoon increment (about 88 mg).

Dressings and sauces: Salad dressings can contain high amounts of sodium. One tablespoon of ranch dressing can contain more than 300 mg of sodium compared to a balsamic vinaigrette, which contains no sodium. Italian salad dressing is lower in sodium than ranch, but still provides over 100 mg of sodium per tablespoon. Jarred marinara sauces can provide excessive sodium – ½ cup of Ragu Old World Style Marinara has almost 500 mg of sodium and brown gravy can have even higher amounts. Homemade sauces and gravies may be a tastier, healthier route.

Snack foods: Try salt-free pretzels as a simple way to cut sodium. Other options include plain popcorn (if age appropriate), fruits, or vegetables as a filling, low-sodium snack. Try lower sodium cheese options, like Swiss cheese (about 50 mg per ounce) too.

Pizza: Remove some cheese and/or order vegetables as a topping. Another option is to make your own pizza. Use a homemade or low-sodium sauce, make half or all the cheese you use a low-sodium cheese (Swiss or low-sodium mozzarella) and top with vegetables or salt-free seasoned meats.

Sandwiches: Check the nutrition label and choose a low-sodium, whole grain bread option. Try using meats that you cooked at home, where the amount of sodium can be controlled. Different cooking styles can contribute to flavor as well. Try roasting meat or toasting the bread.

Remember, habits are learned behaviors. Work with children on healthy eating while they are young, so their habits are well-established as they enter adolescence and adulthood. Parents, it’s never too late to improve your diet either – anyone can make a transition toward a healthier lifestyle.