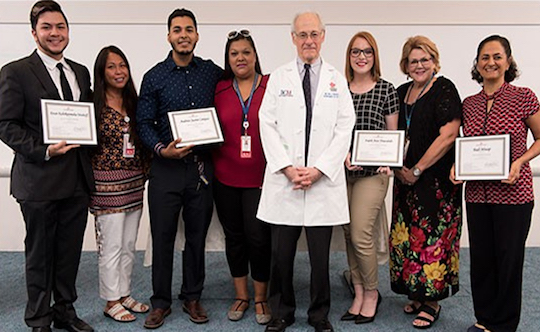 In 1980, my family and I had been in Houston for a little more than a year when my wife, Joan Marion Cooley Finegold, passed away suddenly. Her passing was unexpected, and my three children and I were devastated. As the children and I were dealing with the grief of Joan’s passing, we were overwhelmed by the generosity of the people of this community. I was surprised and humbled to learn that colleagues, friends and neighbors we had known for only a short time created a fund at Texas Children’s in Joan’s honor and had collected about $10,000. We decided that using the gifts to give scholarships that support the education of Texas Children’s registered nurses’ children would best reflect Joan’s career and interests. Four years after graduating with a B.S. from the University of Connecticut, Joan was head nurse in the recovery room at Grace-New Haven Hospital, where we met during my surgical internship. She was a devoted wife and mother and valued her education highly. The children and I gave out the first scholarships in 1985 and have continued to do so every year by selecting children of nurses who are pursuing any form of education and can use some extra help. At the first scholarship ceremony, our children were able to attend and it was a wonderful feeling. It’s not as if we don’t think of Joan all the time or need an event to be reminded of her, but one can’t help but appreciate the acknowledgement on such an occasion. I’ve always brought a photograph of Joan to the meeting room where the scholarships are handed out, and more recently it has been projected onto a screen, so it’s as though she is sharing in the joy that we feel as we honor her. She was an extraordinary nurse and she would be proud to see her legacy put toward the benefit of the nurses’ children. Now and then I’ll receive a letter or a message from former winners, and lately the nursing leaders have invited a few of the nurses whose children won to report on their children’s careers. Even though each scholarship is a modest amount, evidently they do have an impact. The educational activities supported by the scholarship have ranged from graduate school for a 23 year old to music and ballet lessons for a 6 year old. As of this year’s awards ceremony, there have been more than 80 recipients. It’s an honor to know our family has been able to make a small contribution to the devoted nurses and their families. It’s now my 36th year at Texas Children’s and while there have been a lot of changes over the years, this remains one tradition that I hope will last for many more years to come.
Author
Dr. Milton Finegold, chief emeritus, pathology service