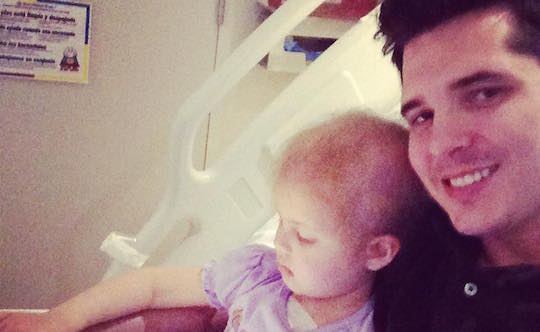 Every Friday during National Childhood Cancer Awareness Month  each member of Drew’s family will share their story and how they have been impacted by her diagnosis.

It hit us like a ton of bricks finding out our 3 and-a-half-year-old has Leukemia. Drew was diagnosed with Acute Lymphoblastic Leukemia (ALL) in June 2014. It’s a strange feeling how the last 16 months have felt like an eternity, yet have flown by.

The 7 to 10 days leading up to the diagnosis were perplexing ones for Drew’s mother. As a Dad, I regularly downplay any hint of ill feelings. “She will get over it,” or “it is just allergies,” I would often say. But my wife knew something was terribly wrong. The day we found out Drew’s diagnosis I was spending the Saturday at a swim meet with our oldest daughter. Through the meet other mothers would ask “How’s Drew? I really hope she will be alright.” I’d say “She’s fine. It’s nothing a dose of Amoxicillin can’t cure.” The sincerity of our friend’s concern was real.

Later that day I met my wife at Texas Children’s Hospital West Campus. She had been there scared and waiting on me for an hour. There was no news. Still, I was thinking, “Give us a prescription and let’s get out of here.” They told us the results were in. It is malignant. You need to go to Texas Children’s main campus. After a moment of composure with Drew in the hospital bed and me and my wife by her side, I stepped out into the hall. I cried. A lot. Consumed with fear of losing a child, being scared of “cancer” and its stigma, and having to face the unknown are all feelings I had.

I will say it’s a lot easier to be strong when you have the support of family and community. 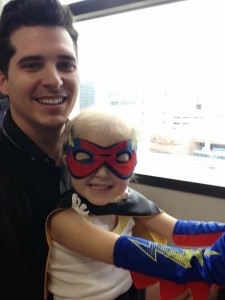 There were many times it was just Drew and I at the hospital alone. We were separated from the rest of our family too much. We had a scheduled 4-night stay for one of the treatments that fell on Thanksgiving day through the weekend. It was the many days, nights and trips to Texas Children’s alone with Drew that helped me learn who my daughter really is and how unconquerable she truly is. Even as bad as cancer stinks, it can’t beat Drew. She got poked with needles (on her port, on her fingers and in her arms). She swallowed pills. It didn’t matter if it was 2 p.m. or 2 a.m., she woke up and took her medicine. She faced fears of ripping off Band-Aids that covered large areas of her chest. That is one of the worst parts for Drew.

The facilities were always immaculate when we were there. That takes a lot of effort from the Texas Children’s team members which often goes unnoticed. like the cleaning crew and all the volunteers. Whether it be the playroom, the library or the communal kitchen, Texas Children’s was always in tip top shape.

As a family we will persevere. We have been changed. We have grown.

From here on out I will regularly give blood, donate time and donate money to further fight against cancer. We are thankful for all of those who have already dedicated so much. It is the reason our Drew lives happily and sparkles everywhere she goes.