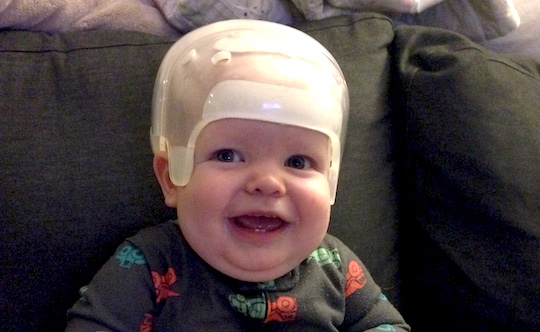 Our second child, Matthew, was born July 16, 2014 at Texas Children’s Pavilion for Women. He’s been a very happy, easy going little boy. He has always looked so much like his big sister, except for his head shape. Her head had been large and round, while Matthew’s was long and skinny and he had a deep furrow in his brow. We all commented on it but didn’t really think it was anything serious. Matthew’s two-month doctor visit began like any other. He was thriving in all areas, but when Dr. Kristin Koush began to examine his head, she became concerned. After a quick feel of the top of his head, she calmly turned to me and told me she was going to refer Matthew to the pediatric neurosurgeons at Texas Children’s. She explained that she could not feel a soft spot on the top of his head and that his head was growing abnormally long and skinny. She then said, “I think he may have craniosynostosis.” It seemed like time slowed down and I could feel my heart beating in my throat. What had been an ordinary checkup had just turned very serious. Dr. Koush was very calm and explained to me that this was serious but not life threatening and that he needed to get in to see them as soon as possible. I left the office with my head swimming. All I could think about was neurosurgeons and craniosyno-what?? What the heck was that? After a quick search of the pediatric neurosurgery website, I found Dr. Sandi Lam’s blog post, Craniosynostosis101: Commonly Asked Questions. Craniosynostosis is the premature fusing of the skull bones. The skull has numerous sutures and these are 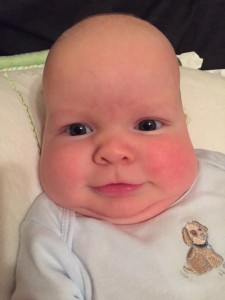 open when a baby is born so the brain can expand and grow. When the sutures prematurely fuse, it can cause an irregular head shape and, more seriously, it does not allow the brain adequate room to grow. We soon met with with Dr. Lam at Texas Children’s. She was calm, confident and immediately put my husband and me at ease even though she had some serious news for us. She told us that his sagittal suture had fused (this is the suture that runs across the top of the head) and that it would require surgery to correct. She spent at least 30 minutes with us answering all of our questions and explaining in detail what the surgery would be like. Because Matthew was so young, he was an excellent candidate for a less invasive endoscopic surgery. Dr. Lam and Dr. Laura Monson, a pediatric plastic surgeon, would work together along with a team of nurses and residents to create two incisions, lift the skin of his scalp and carefully remove the section of bone along the sagittal suture thereby creating a new large soft spot and allowing his head to expand sideways. The surgery would be followed by helmet therapy. Matthew would need to wear a helmet for 23 hours a day for 3-12 months post surgery. We were scheduled to have surgery in 10 days. We came back a week later for a CAT scan, pre-operative blood work and to meet the entire craniofacial team. Everyone we met was friendly, optimistic, very knowledgeable and clearly understood that while Matthew was the one undergoing surgery, this was a whole family experience. They always took time to answer our questions and the whole process was well thought out and smooth. On the day of surgery we arrived early in the morning and waited in the pre-op area we had visited a few days prior. We once again spoke with everyone on the team and met the anesthesiologists. We were extremely nervous, but everyone continued to put us at ease and we knew Matthew was in the best possible hands. During surgery there was an electronic board in the waiting room that updated us on his progress. There was also a nurse who travelled back and forth between the waiting room and the OR providing us with detailed updates. Nothing could have fully prepared us for how Matthew would be in the recovery room. Our precious little boy was so swollen, he was almost unrecognizable. He was hooked up to many machines and for a brief time he was inconsolable. We were encouraged to hold him, kiss him and sing to him, and everyone assured us he was doing really well and the surgery had been a great success. The first 72 hours of recovery were harder than the surgery itself. The wonderful nursing staff helped make sure Matthew’s pain was well managed and again reassured us endlessly that he was doing great. They never became annoyed by our questions. The surgeons, and even his pediatrician, visited us in the hospital. By day four he had made an incredible recovery. The swelling had gone down and he latched back on to nurse. He smiled and began to return to his cheerful, easy going self. His head shape had changed dramatically, for the better, and he was still recognizable to us. He had the same sparkle in his eye and his smile returned. A week after surgery we received his helmet and we were introduced to Jim at the Hanger Clinic. He saw Matthew every two weeks to make adjustments to his helmet. We looked forward to these appointments because we always left feeling reassured that our little boy was healing well and that the surgery had been a success. 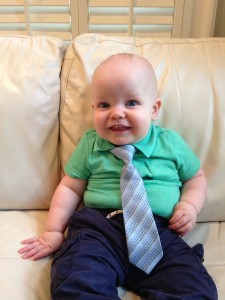 Matthew progressed so well that he was released from helmet therapy after four months. We were anxious that this might be premature, but again, everyone took the time to answer our questions, addressed our concerns and assured us that he was ready. Matthew is coming up on his first birthday. His head looks amazing and scars are barely visible. His head has maintained its new rounder shape. We will continue to have annual checkups with the craniofacial team. We are so grateful to everyone at Texas Children’s for both their exceptional medical care and their endless emotional support.
Author
Megan Boler, Mother of Patient