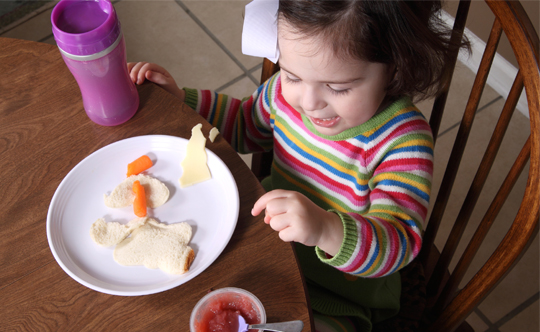 Every parent wants a healthy future for their children, and emerging studies are suggesting that what your child is being fed during their early formative years is significant to developing just that. After examining the sugar and salt contents in 1,000 infant and toddler snacks and meals in U.S. grocery stores, researchers found that many items geared for toddlers are considered to be high in salt and sugar. This information is problematic as a whopping 79% of children classified as toddlers exceed the Institute of Medicine’s recommended daily maximum of salt intake. In this blog I’m answering questions that share more about this study’s findings:

What was the most significant, striking, or surprising finding in this study?

It was interesting that none of the infant foods were high in sodium and most did not contain added sugar.  One reason could potentially be that most infant foods are single foods and/or combined with one other food, whereas toddler foods tend to be combination foods like chicken with vegetables and gravy. We know the palate develops as the child develops, so the more complex foods that would require additional salt or sugar in order to be appealing are introduced starting in the toddler phase.

Can you think of 2-3 examples of foods that you happen to know are particularly high in sodium and/or sugar that might surprise parents? ie, the kinds of foods parents might *think* would be healthy, but which actually contain some of this unexpected sodium or sugar?

What advice can you offer parents about choosing healthier foods for their children as far as reading labels are concerned? For example, labels are often in grams and/or may not be easy to scan quickly at the grocery store. Any tips or rules of thumb for making these choices easier?

Food labels can get very tricky and/or overwhelming. Three things to remember:

What can parents do to reduce the likelihood that their children will get excess sodium and/or sugar? If parents simply don't have time or knowledge about preparing food at home, what can they do?

Avoid adding additional salt to foods at the table or when cooking, and for sugar, avoid adding sugar to cereals or fruits to help your child appreciate the natural flavors.

Secondly, mix it up! Variety is key. Be sure to offer your children a variety of foods.  You don’t necessarily need to make your own baby/toddler foods, you can use some of the prepackaged/convenience foods, but those should not be the base of the diet.  When offering foods, you want to offer variety including: different types of foods (meats, dairy, vegetables, fruits, grains, etc), different colored foods to ensure variety of nutrients, and both prepackaged/convenience foods, as well as foods prepared from scratch.

The editorial accompanying this study suggests that early introduction to high-salt or high-sugar foods might "train" kids for a lifetime of poor eating habits. How strong is the evidence to support that?

Over the past few years, more studies have been published that focus on the impact of early childhood eating habits and behaviors. It does seem that exposing children at a young age to high contents of sugar and salt may lead them to develop a “taste” for these types of foods going forward in life. However, what limit is considered “high” is yet to be determined and will be constantly debated for time to come.

Anything else to add?

It should be noted that there are no set guidelines for what is considered “high” in sugar or sodium for infants or toddlers. This study definitely raises questions as to if standards for sodium and sugar should be created for infant and toddler foods. This study also shows me that we, in the health care profession, still have a lot of work to do in educating parents to make good healthy choices for their families (just because these foods are available doesn't mean we need to use them all of the time) and shows a need for more collaboration with the food industry.

To read more details about the study’s findings, check out Health Day’s article on the research and my tips on understanding nutrition labels.