Our Journey With Holoprosencephaly: Part Two 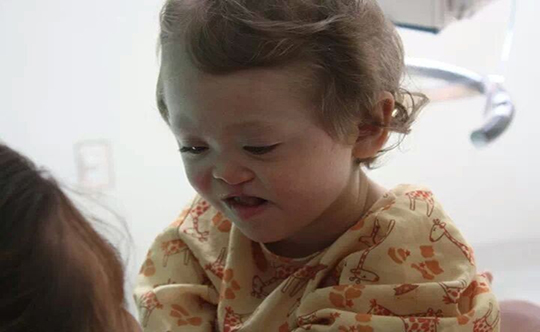 My daughter, Teagan, was diagnosed with a brain malformation called holoprosencephaly (HPE). In part one of her story, I shared what HPE is and how we started our journey at Texas Children's Hospital treating our daughter. In part-two, I'm sharing our experience so far and where we are today. I hope to bring awareness to other families that they are not alone and that there is HoPE in holoprosencephaly.

Since Teagan was born she has spent much time at Texas Children's Hospital. When she was 11 months old she was admitted once again for high sodium and severe reflux. She was diagnosed with Diabetes Insipidus (DI) and was also considered "failure to thrive," weighing only 12lbs at 11 months of age. She was put on medication for DI and reflux and was also put on a high calorie diet to help her gain weight. We learned so much during this hospital stay.

Teagan avoided hospital stays for 366 days before being admitted for aspiration pneumonia. She was scheduled for her first cleft surgery on January 26th, 2012 only to have it cancelled and to be admitted to the pediatric intensive care unit (PICU) for high sodium. In February, she had a viral infection, HMPV, similar to RSV. She stopped breathing several times and was flown to Texas Children's PICU. After this hospital stay we were finally able to schedule her cleft lip repair with Dr. Edward Buchanan on in May 2012. When Teagan was born we fell in love with our cleftie. A cleft smile is the most beautiful smile you will ever see. They light up the world. This surgery would change the way she looked and it was very hard to change the face we fell in love with. Its been almost two years since her lip repair and we still miss her wide smile from time to time but we absolutely love her new smile.

In June 2012 she was diagnosed with seizures and started treatment. Due to her reflux getting worse causing aspiration pneumonia and sodium issues her GI team, Dr. Bruno Chumpatazi, Carolyn Gilbert, nurse practitioner and her pediatric surgeon, Dr. Mary Brandt decided she needed surgery. They scheduled her for a nissen fundoplication, reflux surgery. On July 4th she was admitted for fluid management before her surgery on July 5th. They found Teagan had a congenital diaphragmatic hernia (CDH), another birth defect. Her liver had flipped and was lodged in her diaphragm. The doctor told us she was very glad we decided to go ahead with the reflux surgery or this may not have been found in time. Usually this birth defect is found at birth or shortly after. Teagan's was found at two and a half years old. Because of the placement of the hernia it was hidden. In September 2012 she was scheduled for her palate repair. After the surgery she had much difficulty breathing with her new palate. She was having to learn to breathe a whole new way. She was put in the PICU and put on a vent to give her body time to rest and palate time to heal. She is so amazingly strong. 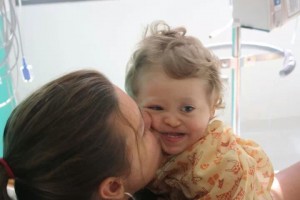 We like to say Texas Children's Hospital is our home away from home. Today Teagan is the healthiest she has ever been. She now has home health nurses that come into our home and help us care for her. They are a part of our family, I don't know what we would do without them. She has not been in the hospital since November 2012. Teagan sees several specialists at Texas Children's Clinical Care Center to follow up on her diagnosis and treatment. Her endocrinologist, Dr. Rona Sonabend has been one of our rocks through this journey with Teagan. We see her for multiple hormone replacements every three months.  She is another one of those people that holds a special place in our hearts. She listens to us and understands this journey is not easy. We could not have asked for a better endocrinologist.

Teagan has a great medical Team at Texas Children's, including,  Dr. Amber Stocco, Dr. Monica Proud, in neurology, Dr. Bruno Chumpatazi,  Carolyn Gilbert in GI, Dr. Edward Buchanan in plastic surgery, Dr. Mary Brandt in pediatric surgery, Dr. Lorraine Potocki in genetics, Jane Edmond in ophthalmology and Dr. Barbara Wechsler in physical medicine. We have the best of the best caring for our daughter! We are so grateful for each of them. Thank you to all of them for the incredible care they give Teagan. 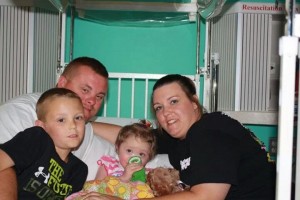 Our life changed forever when Teagan was born. She changed what was "normal" for our family. Our life now may not be considered everyday normal but it is our everyday normal. She is a bright eyed, bubbly, happy, sweet little girl.  While you are lost in the diagnosis of holoprosencephaly and everything that comes with it, know you are not alone. There are other HPE families just like you who are living with HoPE. Our hope is for parents and families of HPE children to know you can live with HPE. The smiles, the laughs, the little things in life that most take for granted you will cherish for a lifetime. What your child will teach you are things you never thought you wanted to learn or could learn. It takes an army to raise a child and an even bigger one to raise a child with special needs. Remember to take all the help you can get. Let people help you, tell them what you need, they want to help but do not always know how. We get a lot of support from "Team Teagan". We have a Facebook page for Teagan called, Teagan's Smile. Team Teagan is always there for us, to lift us up when times are hard.  Don't expect everyone to understand what you are going through. They could not possibly understand unless they have walked your path. Take time for your marriage, yourself, and your other children. We are truly blessed to be Teagan's parents and to be on this journey with her. And lastly, always share your story, you never know who's life you will change.