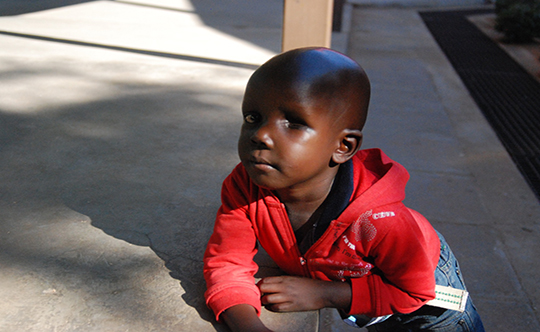 End of treatment photo:  A rare moment at of Nkosana standing still.

I had been working in Botswana for a little over two months when I learned of a three year old boy named Nkosana. When I met Nkosana’s mother, she told me he had been sick for almost a year and had developed a large tumor on the left side of his face. Six months after she first recognized the changes in his left eye, Nkosana was referred to an eye surgeon who removed his eye. Delayed recognition and referral of cancer is common in resource-limited settings, meaning children often present with more extensive cancer. A couple months after surgery, she received the report that showed Nkosana’s eye had retinoblastoma, a malignant cancer of the eye, seen in young children. It was at this point that Nkosana was referred to me as the only pediatric hematologist-oncologist in Botswana. (You can learn more about my journey in Botswana, here.) Retinoblastoma  usually presents with the pupil or black part of the eye becoming white (called leukocoria as the inside of the eye fills with tumor.) In Nkosana’s case, the cancer was metastic: it had spread from his eye to throughout his face and head. 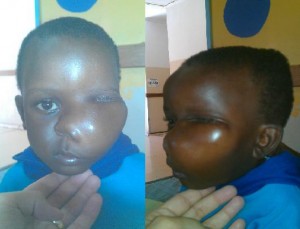 Photo: Nkosana on our first meeting, after removal of the left eye with a mass growing from the orbit and a mass on the back of the head.

In the United States, almost all children with retinoblastoma survive. Many children do not even have to have their eye removed.  This terrific prognosis is possible because the signs of retinoblastoma are typically discovered early and the patients are referred quickly for treatment. One of the reasons pediatricians shine that bright light in a child’s eyes on every well child visit is to look for signs of retinoblastoma. On first impression, Nkosana had what looked like an unsurvivable cancer. The mass had grown from his orbit (eye socket) to involve the left side of his face, causing difficulty breathing through his nose. Moreover, he had masses on his skull as well. We got an MRI that confirmed my fears that his cancer was widespread throughout his head, including the lining of his brain. 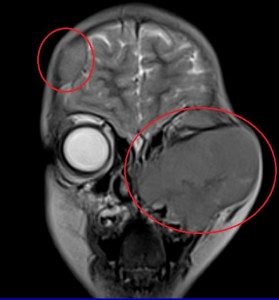 His mother informed me that Nkosana was her only surviving child and wanted us to do anything and everything we could to try to save him. We planned to try an aggressive chemotherapy regimen for a couple of months. If the treatment was not too toxic and he showed a good response, we would complete four more months of chemotherapy followed by high-dose radiation to the tumor on his face. With this extensive spread of the cancer, survival was very unlikely. Since it is rare that children in the US present this late with retinoblastoma, we knew the therapy for Nkosana had to be much more intense putting him at risk for severe side effects from the chemotherapy and radiation. Despite my fears and his parents’ fears, Nkosana sailed through the chemotherapy and radiation. It has been almost a year since he had any treatment and there is no sign of cancer! It will be years before we can be confident that the cancer will not return and he is unfortunately at risk for other complications down the road from the radiation. However, his mother gets to love on him every precious day and is quite happy about that. For more information about the International Program and Texas Children’s Cancer and Hematology Centers visit, here.