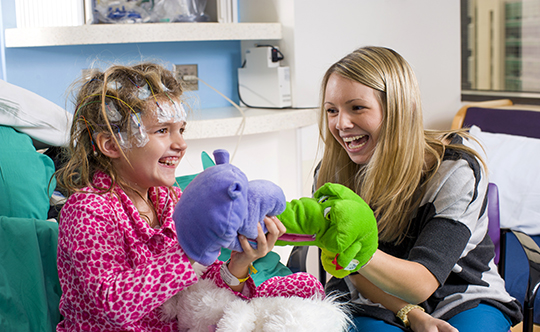 The Epilepsy Center located at Texas Children’s Hospital provides comprehensive care for children with epilepsy and seizure disorders. Last year we saw 3,284 patients. And with each family that comes in, we receive a lot of important questions, which is why I wanted to answer some of the most common questions regarding childhood epilepsy: What is epilepsy? Epilepsy is a neurological condition or disorder of the brain that causes sudden brief attacks called seizures. Seizures can alter awareness, physical movements, consciousness or actions and can last from a few seconds to a few minutes. When seizures occur, they can look like: staring spells, lack of response for brief periods, repeated movements that look out of place or unnatural, unusual sleepiness, irritability when awakened from sleep, and sudden falls for no reason. Epilepsy is the 4th most common neurological disorder and is not considered a disease or mental illness. Do we know what causes it? Researchers believe seizures occur when there is an abnormal surge of electrical activity between brain cells, however, exactly why this happens remains unclear. Some causes include: trauma to the brain, brain tumors, genetic malformations, high fevers (febrile seizures), metabolic disorders, and stress. How many kids are likely to have it?  A person could have a seizure at any time during their lifetime. However, it is estimated that 1 in 10 kids will have a seizure in their lifetime.  About ½ of 186,000 epilepsy cases diagnosed each year occur in childhood. Is there a cure?  There is not always a cure for epilepsy, but there are treatments available such as anti-epileptic medications, Vagus Nerve Stimulator, Ketogenic Diet, or epilepsy surgery, some resulting in remission of the epilepsy. Some individuals who have had epilepsy and become seizure free are always at risk for reoccurrence of seizures. Types of treatment: Texas Children’s Hospital is noted for having the professional expertise and facilities needed to provide the highest level medical and surgical evaluation and treatment for patients with complex epilepsy. Here are the different types of treatment: What makes Texas Children’s Epilepsy Center so unique? Texas Children’s Epilepsy Center is the first hospital in the world to use real-time MRI-guided thermal imaging and laser technology to destroy lesions in the brain that cause epilepsy and uncontrollable seizures. This new surgical approach offers a safer and significantly less invasive alternative to craniotomy, currently the most commonly used cranial surgical treatment for epilepsy. We were recently recognized by the National Association of Epilepsy Centers (NAEC) as a level 4 epilepsy center. We have a comprehensive multidisciplinary team of pediatric epileptologists, neurosurgeons, specialized pediatric nurse practitioners, neuropsychologists, neuroradiolgoists, nuclear medicine specialists, neuropathologists, dieticians, social workers and child life specialists. Texas Children’s Hospital is also the first children’s hospital in the U.S. to use a PET/MRI (position emmission tomography/magnetic resonance imaging) scanner, to assist with seizure localization. And this year we recently opened an expansion to our Epilepsy Monitoring Unit (EMU). We went from four to six beds with planned expansion to 12 beds during year of 2014! In the EMU, we admit patients to monitor for spells, seizure characterization, seizure quantification, and to determine for epilepsy surgical candidacy. The unit also has a clubhouse where patients can move around and be monitored wirelessly. For more information about Texas Children’s Epilepsy Center, visit here.