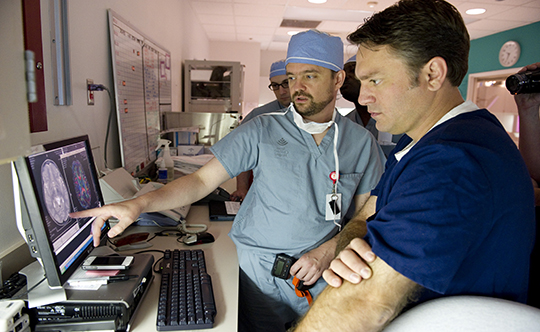 Dr. Daniel Curry and Dr. Angus Wilfong recently shared with the world results of their pioneering experience with stereotactic laser ablation brain surgery for hypothalamic hamartomas. Their study was recently published in the highly respected journal, Epilepsia. There are plenty of stories about doctors doing “cool stuff”. It’s sometimes difficult to tell what is particularly innovative, or why it matters. In my book, Dr. Curry and Dr. Wilfong are not only doing fantastic work – they are game changers. They have pioneered a surgical technique and technological application that is an incredible leap forward for brain surgery, and have completely altered the way we look at treatment for certain daunting seizure disorders. Saying something or someone is a game changer in medicine is a huge deal. The Merriam Webster dictionary defines game changer as: a newly introduced element or factor that changes an existing situation or activity in a significant way. Other definitions of game changer: a person who is a visionary. A game changer has new and different ideas that stand out from the crowd. This person has an idea that completely changes the way a situation develops. Dr. Curry is a Pediatric Neurosurgeon and director of the epilepsy surgery program here at Texas Children’s Hospital. Dr. Wilfong is a Pediatric Neurologist/Epileptologist and director of the Texas Children's epilepsy program. Over the past few years, they have pioneered minimally invasive stereotactic laser ablation surgery for epilepsy. I have seen them work tirelessly to develop better ways to treat medically intractable seizure disorderswhen medications are not enough to control seizures. In fact, in 2010, Dr. Curry was the first in the world to perform stereotactic laser ablation surgery to treat epilepsy, in a child with tuberous sclerosis. In 2011, they applied the technique in a child with laughing seizures from a brain disorder called hypothalamic hamartoma. The surgery was a success, and stopped the frequent seizures that had been occurring for years. Since that time, the Texas Children's epilepsy team lead by Dr. Wilfong and Dr. Curry has been applying stereotactic laser ablation technology (made by Visualase, Inc., Houston, TX) for seizure surgery for carefully selected patients. Our Texas Children's team has the largest experience in the world in stereotactic laser ablation surgery in children. There are a few parts to this name: stereotactic means finding the target in the middle of the brain in 3-dimensional space.  In neurosurgery, we use computer modeling and a frame around the head that targets for ultimate precision. The laser system is delivered through a small skinny 1.6 millimeter fiber bundle. This means we can access even deep parts of the brain with only a small 3.2 millimeter hole in the skin and bone to accommodate the 1.6mm fiber bundle (in comparison to the large incision and temporary removal of a piece of skull bone in traditional brain surgery). The ablation happens with delivery of a targeted thermal energy with the laser to destroy a target in the brain (in this case, the hypothalamic hamartoma connections causing the seizures) with minimal damage to surrounding brain tissue. Hypothalamic hamartomas are deep-seated lesions in the brain that cause intractable seizures that look like uncontrollable laughter when nothing is funny. They render children and adults incapacitated in daily life with seizures. They are particularly challenging problems for surgery. Traditional open surgeries  for this type of disorder entail dissection around a lot of delicate brain structures because of where the hypothalamus is located; even in the most experienced hands, these surgeries carry very high risks including blindness, lifelong hormonal problems, memory problems, and paralysis. A weeklong hospital stay on average is needed to recover from an open surgery. Now, the revolutionary stereotactic laser ablation technique developed at Texas Children's Hospital enables destruction of the hypothalamic hamartoma target without the trauma or side effect profile of the traditional open surgery. To date, 15 patients have undergone this procedure for hypothalamic hamartoma at Texas Children's– almost all have gone home the very next day! These patients have previously had ongoing seizures for years, and the procedure has successfully stopped their seizures. Overall, more than 30 patientshave had laser-guided ablation surgeries for diagnoses ranging from seizures from hypothalamic hamartoma and cortical dysplasia, to certain types of brain tumors. Dr. Curry and Dr. Wilfong point out that none of this would have been possible without the whole team at Texas Children's, including every pediatric epilepsy specialist in the department of neurology, the neurophysiology technicians who help with intraoperative monitoring during surgery, the radiologists, the radiology technicians who run the MRI machine, the anesthesiologists for surgery, and nursing staff both in and out of the operating room. Because of the great results and the low complication profile, the technique has gained acceptance and interest around the country. Stereotactic laser ablation is now an almost routine part of practice and certainly for the Texas Children's epilepsy program. It is not surprising that many surgeons around the U.S. and the world have developed interest in this technique. Since it is a new procedure, it is very important for surgeons, neurologists, and scientists to pool their knowledge and experience, and learn together.  To this end, Dr. Curry and I are organizing the world’s first central registry of laser ablation brain surgeries to be coordinated at Texas Children's Hospital. The goal is to develop and share this knowledge for the future, and for many more surgeons to be able to safely and effectively help patients with seizure disorders. Texas Children’s Hospital offers a comprehensive epilepsy and epilepsy surgery program – from initial workup, diagnosis, and medical management to surgical interventions ranging from minimally invasive stereotactic laser ablation to vagus nerve stimulator implantation to open surgeries such as subdural grid monitoring, resection of seizure foci, corpus callosotomies, and hemispherectomies. For further information or for an appointment, please call (832) 822-3950. References: Wilfong, AA, Curry DJ. Hypothalamic hamartomas: optimal approach to clinical evaluation and diagnosis. Epilepsia, 2013 Dec:54 Suppl 9: 109-14. doi:11.1111/epi.12454
Author
Dr. Sandi Lam, Pediatric Neurosurgeon