All In A Day’s Work: How Pediatric Simulation Center Helps First Responders 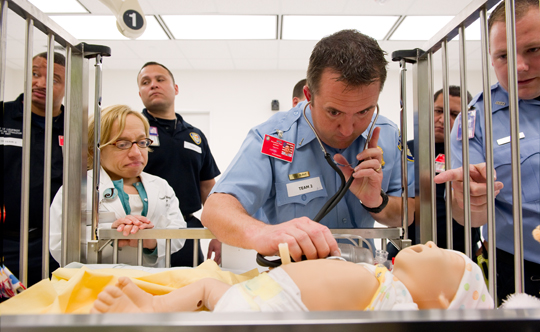 July 16, 2013 started like any other day. Our area of the city responds to many medical emergencies, trauma and calls for service. In District 68 where we are located, we responded to more than 17,000 calls in 2012 alone. We have 5 Advanced Life Support Units and 9 Basic Life Support Units along with each Engine and Ladder serving as a first responder.

On that day, we had a scheduled public relations event where four Houston Texans players and cheerleaders presented awards to our District Station. The event was short-lived as Ladder Co. 68 responded to a choking call. While the awards were being admired, a cardiac arrest at the same location came in over the station speakers for Ambulance 68, Squad 68 and Supervisor 82. Ladder Co. 68 was the initial first responder and I was the initial Advanced Life Support Provider on the scene. What we found on arrival was a pulseless boy who appeared to have a dragon fruit seed in his mouth which had possibly lodged in his airway. We quickly moved into action carrying the lifeless child to the Ladder Co. parked out front.  The crew did an excellent job working like a NASCAR Pit Crew performing cardiopulmonary resuscitation measures and creating an opening which provided lifesaving oxygen until the Advanced Life Support crews arrived.  After a quick reassessment, we placed the patient in the ambulance because of the Houston heat at that time of day (97 degrees). To our surprise, the patient miraculously regained pulses, albeit slowly by our medical standards. As we were in the ambulance on the way to Texas Children’s Hospital, I made the command decision to get the little boy intubated. Thankfully his heart rate increased and our patient started having spontaneous respiration.

Even more surprising is that a couple of days later, Firefighter Paramedic Cindy Laskowski texted me and asked me if I had heard an update “from the kid that had the seed in his throat?” We heard that the patient had already been released home and had gone to Mass with his parents. As I mentioned, we respond to several thousand calls a year and each one is different. Pediatric patients, because they have different medical needs, can be intimidating for newer and even seasoned EMTs and Paramedics. In 2012, The Pediatric Simulation Center at Texas Children’s began providing Pediatric Simulation Training for Emergency Pre-hospital Providers (PEDISTEPPs) which has proven to be a bridge to gaining confidence in providing our pediatric patients the best possible outcomes. I believe this course played a big role in saving this child and I would encourage everyone that has contact with a patient in the emergency setting to attend a PediSTEPPs class. It decreases anxiety and stress levels allowing medical personnel to be professionally, mentally and efficiently sound in our judgment and treatment of each pediatric patient we encounter. And, I am not the only one who believes in this program. On Aug. 27, our PediSTEPPs team was awarded a proclamation from the City Of Houston for PediSTEPPs Day in recognition of our life-saving work.