My husband, Jered, and I are one of those couples that can’t wait to give each other gifts. Every birthday, Christmas or anniversary we end up exchanging presents days before the actual celebration. That being said, it was no surprise we couldn’t wait to find out the sex of our baby so we could spoil him or her rotten. I secretly (or not so secretly) wanted a girl, but knew I would be ecstatic about either. 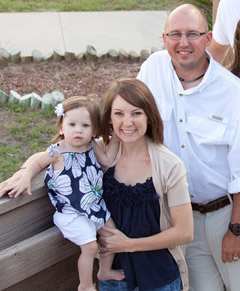 Jered and I felt giddy walking into our 20-week scan. I will never forget August 6, 2010. After finding out our little munchkin was a girl, we were filled with so much joy. Smiles on our faces, we finally felt the reality of parenthood setting in. The excitement was cut short, however, when the ultrasound technician said she had some concerns, and left the room to get the doctor. Our thoughts were flooded with worst-case scenarios, as attempts to block out fear failed miserably. Jered pulled me close and said a simple prayer. The doctor returned and told us that our baby girl had Congenital Diaphragmatic Hernia (CDH). Her diaphragm did not develop fully and had left a small hole. Some of her intestines were in the chest cavity, crowding her lungs and causing her heart to be pushed to the other side of her body. The words sank heavy on our wounded spirits. Our rock star, Brooklyn, born on November 28, 2010 spent 4 long months in the NICU at Texas Children’s Hospital. It’s funny how short 120 days seemed right after we were married and yet being in the hospital that long felt like years. Brooklyn was put on ECMO shortly after being born and remained there for 10 days. This is a heart and lung bypass machine that provides the doctors time. It was not a treatment, but a last resort to stabilize Brooklyn in order to perform her corrective surgery. This was by far the most terrifying day of our lives. Those who are familiar with the NICU will tell you of the “roller coasters” that frequent the units. Brooklyn’s journey fits this description perfectly. Chronic lung disease, a head bleed, multiple transfusions, blood clots, chylothoraces and chest tubes were among the list of complications. Her strength to make it through each day astounded us. She was not only a model of hope, but also a courageous survivor of the impossible. Challenging obstacles that would have given merit to losing faith came and went. Brooklyn came home on March 23, 2011. Jered and I were clueless to say the least. A feeding tube and lovenox injections were among the many obstacles we faced after discharge from the hospital. Right before Brooklyn was born I became unemployed. It was unexpected and a bit alarming, but it gave me the opportunity to spend every day at Brooklyn’s bedside. To relieve some emotion, I wrote a daily blog entry on my Tumblr site to update family and friends. We soon had many followers, some of which I had never even met. Towards the end of Brooklyn’s hospitalization, many of her followers encouraged me to turn the writings into a book. I laughed at first. I liked to write, but never thought of myself as a stand out author. However, something inside me stirred, and I began to feel a pull towards publishing. I contacted a friend of a friend who was in the publishing business and before I knew it “Surviving C47” was created. Over a span of about 2 months I edited my roughly concocted blog entries and polished off Brooklyn’s story with the ending of her homecoming. In July 2011, Brooklyn’s journey became available to the public online at Amazon and Barnes and Noble. The moment was surreal. To be a part of spreading awareness for CDH and highlighting the efforts of the Fetal Center at Texas Children’s Hospital, was an incredible feeling. I had hoped the book would become a tool for struggling parents who needed a “faith lift”, but it became much more. Brooklyn’s story became an inspiration to everyone; from people with serious medical issues, to those who just had a “case of the Mondays”. I was blessed to take a job at Texas Children’s Hospital this past May, and continue to be in awe of the impact this hospital has on our children locally, nationally and internationally. As a parent, I’m thankful for the incredible staff and their unending excellence in patient care. As a staff member, I am honored to be a part of such an accomplished institution and continue to be inspired by its guiding principles. Our family was blessed through our experience with Brooklyn and we continue to be awestruck by her perseverance. She is such the normal kid these days and it absolutely blows my mind as well as her medical teams. She’s an incredible example of determination and strength that we all can learn from.
Tags
CDH
Congenital Diaphragmatic Hernia
corrective surgery
ECMO
lovenox injections
Surviving C47
surviving c47 author
texas children's fetal center
texas children's NICU
what is an ecmo machine
Photo