Mosquitoes, a familiar foe to anyone residing in Texas, have been in the local news more than usual in recent weeks. For decades, Texans have been dealing with their annoying presence most commonly during hot summer months and after wet weather. My dad would always tell me the Astros played inside because watching outdoor summer baseball in Houston was intolerable, not because of the heat but because of the mosquitoes. As a boy in Dallas, I remember being sprayed with what seemed like a whole can of mosquito repellent at outdoor events; I would smell so bad that I'd repel people as well. 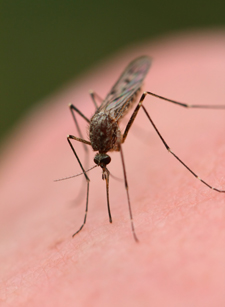 Commonly, mosquitoes drive people crazy by their constant presence and the irritation and pain they would cause. Rarely do they ever cause any medical harm. While biting humans, female mosquitoes suck a small amount of blood needed to mature their eggs they intend to lay. A small percentage of viruses may be spread into humans by mosquito vectors which bite us after picking up the virus getting blood from another food source. These viruses need such vectors in order for their infectious spread.

In 1999, a certain type of virus spread through mosquitoes, called West Nile Virus, began causing human infection, mainly in adults, similar to many other previously known illnesses. This arbovirus, a name given to a class of viruses resulting from a bite from a tick, mosquito or sandfly, can cause a flu-like illness consisting of fever, joint pain, muscle aches and weakness but may progress to invasive neurological disease

(infection of the brain and the surrounding spinal fluid) and possibly death. Symptoms of this kind of disease are headache, vomiting, fever, neck stiffness, mental status changes involving abnormal behavior, level of consciousness and possibly seizures.

In the summer and autumn months, the virus peaks in many states throughout the country, though not often mentioned as a common cause of illness in these parts. However, this summer, especially in North Texas, an alarming spike in West Nile virus has become a major public health risk more so than any other state. According to ArboNET and the Center for Disease Control, Texas has been by far the most affected state, along with Louisiana, Mississippi and Oklahoma. Only a handful of states in the southwest and east coast have had no detectable WNV activity, but the majority has been in the Gulf Coast and directly north of Texas. Cases of flu-like illness as well as more invasive disease have been making headline news in Dallas, and the city has begun spraying against mosquitoes in many areas, including my childhood neighborhood where my parents still reside. As of the middle of August, over 200 cases of WNV have been confirmed, including 8 deaths in Dallas County.

The incubation period for WNV-associated diseases is between 5-15 days. Most illnesses in children are flu-like symptoms, fever, muscle aches and headache. According to a recent article published in Pediatrics, almost 1,500 cases of WNV were seen nationally in children from the years 1999-2007. The vast majority of cases were in July-September. Approximately 1 in 3 infected children developed neuroinvasive disease, mostly meningitis. Three pediatric deaths were seen in this study. Children during this time reflected only 4% of all WNV cases, making it a rare disease compared to adults. Most infected with the virus at any age do not show any symptoms at all. Several confirmed cases of WNV infection in Texas have come from positive screening at blood banks from unknowing blood donors this year. These adults have been exposed to and carry the virus, test positive on screening, yet show no significant symptoms at the time of diagnosis. Of those infected, less than 1% develop disease beyond flu-like conditions. Those at highest risk of invasive infection remain the elderly.

Recommendations to prevent exposure to WNV from mosquitoes involve the 4 D’s: