Just eight months after Chevron and Texas Children’s Hospital announced a partnership to expand the hospital’s Global Health Corps (GHC), six U.S. trained doctors have embarked on a yearlong journey to fulfill the program’s goals. The GHC program puts doctors on the ground in Africa who will provide much-needed health care to thousands of medically underserved mothers and children and train hundreds of health care professionals. The 2012 all female, inaugural class of six Chevron-supported doctors have completed their four-week pre-service training in Houston and are preparing to leave the United States, each hoping to make a difference in the communities they’ll serve. Four of the U.S. board-certified and licensed pediatricians will be stationed in Angola while two doctors will service in Liberia. 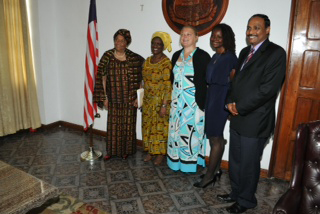 Chevron has invested more than $3.5 million in Angola’s health care sector, benefiting more than a million people including the Angola Sickle Cell Initiative. The initiative recently marked one year of disease screening and treatment. Since the program’s inception, more than 17,000 babies have been screened for what was once an overlooked killer of thousands of children throughout Africa. Plans for program expansion within the capital city of Luanda as well as other provinces, such as Cabinda, are underway.

The two physicians traveling to Liberia are Yvonne Butler and Josephine Reece. Butler was born in Liberia, but moved to the United States as a young child where she trained in the specialty of obstetrics and gynecology. Reece trained in internal medicine and pediatrics and completed medical elective rotations in Zambia, Uganda and Honduras. Butler, who said she is “honored” to help tackle some of her home country’s most immediate medical needs, also held a special training assignment in Zambia and is an assistant professor in Gynecology at Baylor College of Medicine. A total of 45 physicians have been selected for the 2012 GHC program’s long-term assignments in nine African countries where they will care for those affected by serious or life-threatening medical conditions such as sickle cell disease, malaria, tuberculosis, malnutrition, cancer and HIV/AIDS. In addition, they will perform clinical research and train local health care professionals. While the company’s donation to the program initially focuses on Angola and Liberia, plans are in place to expand its reach to other countries.