For The Forgotten Children Of Central Africa, One Test Makes The Difference Between Life And Death | Texas Children's Hospital

For The Forgotten Children Of Central Africa, One Test Makes The Difference Between Life And Death 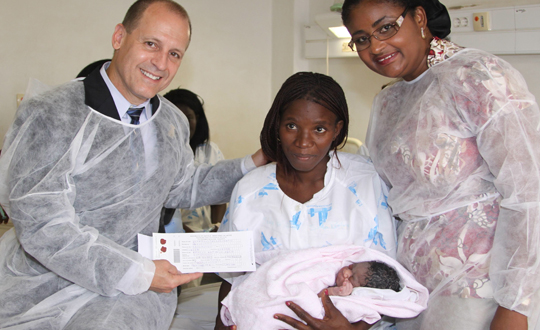 16,000 babies born in Angola this past year received screening for an oftentimes-overlooked disease thanks to The Texas Children’s Center for Global Health’s new sickle cell disease screening program.

Encouraged by the First Lady of Angola, and aided by the vision and support of Mr. Ali Moshiri (President, Chevron Africa and Latin America Exploration and Production Company) and Dr. Mark Kline (Physician-in-Chief at Texas Children’s Hospital and Chairman of Pediatrics at Baylor College of Medicine), the Angolan Sickle Cell Initiative was launched in March 2011 by the Texas Children’s Center for Global Health.

Now, one year later, over 16,000 babies have already been tested, and several hundred babies with sickle cell disease have been identified and treated. Best of all, Angolan obstetrical nurses have been trained to collect the blood samples, Angolan laboratory technicians have become expert in diagnostic testing, and Angolan pediatric nurses and doctors have learned to provide lifesaving medical interventions. This landmark program in Angola serves as a big step forward in the country’s efforts to improve its healthcare system. Sickle cell disease has mortality rates that rival that of malaria, HIV/AIDS and tuberculosis. Why then, haven’t you heard of it? Probably because in the United States we detect the disease early and administer treatment immediately. Here, all newborn infants are tested for sickle cell disease immediately after birth. Our newborn screening program identifies approximately 2,500 babies with sickle cell disease each year. With proper intervention, almost all babies born in the United States with sickle cell disease live to adulthood.

Not so in Angola, where the burden of sickle cell disease is immense and accurate statistics aren't even available. Angola has just 1/16 the population of the United States, but over 10,000 babies are born each year with sickle cell disease — this is at least four times the rate in the U.S. That is among the highest documented prevalence in the world and, sadly, not a single one of these babies is identified at birth. By five years of age, 80-90% of these children have died. Over the next 12 months, Texas Children’s Center for Global Health plans to expand to a second province in Angola, and more countries in Africa within the near future, with the hope of screening even more babies and saving more lives. Now we have the chance to do right by the people of Angola, by testing every baby for a disease all too common and all too deadly if left undetected – just like we do in the United States.