Another Kind Of Race For The Cure | Texas Children's Hospital

Another Kind Of Race For The Cure 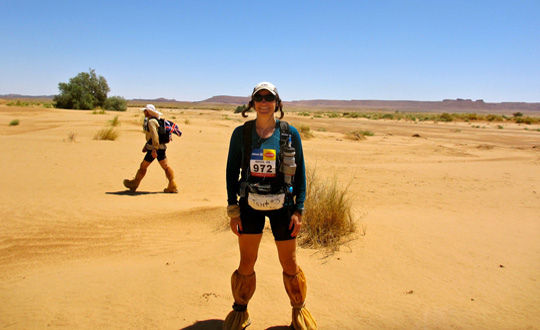 On April 8, 2012, I crossed the starting line with more than 850 people in the toughest foot race on Earth: the Marathon des Sables (MdS). The race is held in 6 stages over the course of 7 days, spanning 155 miles/240 km of the Sahara Desert in blistering heat (up to 120° F). It requires complete body, mind, physical and personal dedication as well as self-sufficiency, meaning that each participant must carry his/her own food, sleeping gear, first aid and other materials. People have asked me why I would subject myself to such rigorous training for a grueling race that allows me nothing but whatever I can carry in a backpack.

Simply put: charity in honor of my brother who was diagnosed with Hodgkin’s Lymphoma and a personal life goal.

I am no stranger to competitive athleticism. I used to swim 4-5 hours a day with 1 of the top teams in the USA. It is still 1 of the most amazing teams I have ever had the privilege to be a member of. We had a common goal — to be the best for ourselves and our team — and we had the greatest coaches. Life lessons were taught on the pool deck.

At the end of my swimming career and after a few marathons, I set a goal to complete the Ironman by the time I turned 35, representing the pinnacle of my athletic career. About a year ago I was looking over my Ironman goal and realized I wanted a more monumental challenge to train and finish. In the MdS, you don’t just show up at the starting line. There are no short cuts, magic foods, special shoes or apps to get you ready. It is complete dedication. After receiving a spot in the race last summer, I got some advice from past participants and started my training, including 2 Vertical Tower runs (using the Heron Tower and Tower 42, 2 of the tallest sky scrapers in London), completing the GRIM Challenge, and climbing Mt. Meru (~15,000 feet) in 1 day. 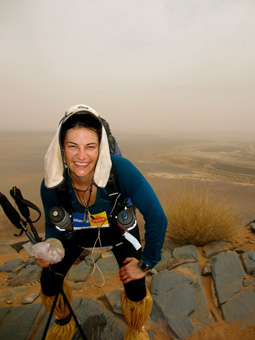 I believe in the value of charity, but instead of giving back I liken it to paying it forward. Some of what we have done in our lifetimes is due in part to generations that have brought us this far. I believe society is dependent on the path of a generation paying it forward to the next.

My target was to raise a combined $35,000 for Texas Children’s Cancer Center and Cancer Research UK. In recent years, cancer claimed the lives of my grandmother, a work mentor and the mother of a childhood friend. My younger brother and only sibling, Michael, was diagnosed with advanced Hodgkin’s Lymphoma 15 years ago. Michael survived and actually met his wife, Rachel, as counselors at Camp Periwinkle, a summer camp sponsored by The Periwinkle Foundation for Texas Children's Cancer Center patients and their siblings. Through Rachel and her family’s friendship, due in large part to the work her father contributed to the field of oncology, we met Dr. David Poplack, Director of Texas Children’s Cancer Center. It was such an honor to thank him personally.

It is because of Michael, cancer sufferers and the passionate doctors and staff who work to cure the disease that I contribute my time and money to Texas Children’s Cancer Center and Cancer Research UK. The donations far exceeded my goal, resulting in raising $85,000 to cancer research. I wrote the names of each donor on my backpack and dedicated the long stage to 2 people: Jen, a good friend and mother of 2, who received her second round of chemotherapy for breast cancer during the race; and Gwen, a lifelong family friend who passed away from cancer right before the race started.

81 km does not seem tough no matter how ridiculous the terrain, weight of your pack and searing heat of the desert when you reflect on the hardships others are facing. I ran for a lot of folks who have had cancer, and I’m very proud to have raised money in honor of my brother.

For more information on my participation in the MdS, please visit my blog Relentless. Forward. Motion.