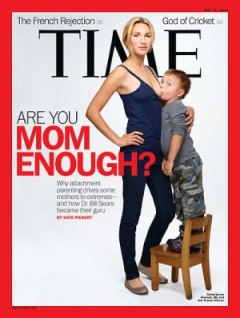 The TIME magazine cover story that hit the newsstands last week shows an older child (over 3 years) breastfeeding while standing on a chair while both he and his mother look into the camera. This is the visual that TIME chose to depict the 20th anniversary of “attachment parenting”, a phrase coined by Dr. Bill and Martha Sears.

Where to begin to consider this picture?

First, I am struck at how unnatural the pose looks. No matter whether a woman is breastfeeding her newborn infant or a toddler, they are usually holding the child in their arms. Breastfeeding is not like a cafeteria where you wait in line for your turn and step up to get your meal! It is a profound interaction between mother and infant that results in a cascade of sensory, hormonal and emotional responses in both mom and baby. The hormones that are released in the mother (and the baby) serve to strengthen that attachment… which is a good thing! In this picture, this relationship is not apparent. It is setup to emphasize the older age of the child and the messaging not about breastfeeding, but about one particular parenting style.

Secondly, focusing the national discussion on whether a 3 year old should stand up to breastfeed misses the much more important point about breastfeeding in the United States. That is, the tragedy that in the U.S. despite the efforts of many organizations (e.g. American Academy of Pediatrics, La Leche League, Women’s Infants and Children to name a few) and maternal-infant health care staff, the rates of breastfeeding until 3 months of age, much less 3 years of age, is pretty dismal compared to many other countries. The American Academy of Pediatrics recommends weaning when both child and mother are ready. This is reasonable and not generally controversial, except when described as the TIME photo did.

The real challenge for our society is providing the support mothers need to get through those first few months so that they can achieve their goal of exclusive breastfeeding during the first 6 months and up to a year and beyond.

Finally, it is sad that TIME missed an opportunity to tout the benefits of mothers becoming attached to their babies — what a novel idea! Certainly breastfeeding can strengthen this attachment, especially when mothers have the support of their loved ones and others. But in the absence of breastfeeding beyond a certain defined age, any behavior that will strengthen the relationship between mother and child will be of benefit to families and our culture as a whole.