Sugar Sweetened Cereals — Nutrition Or Dessert In A Bowl? 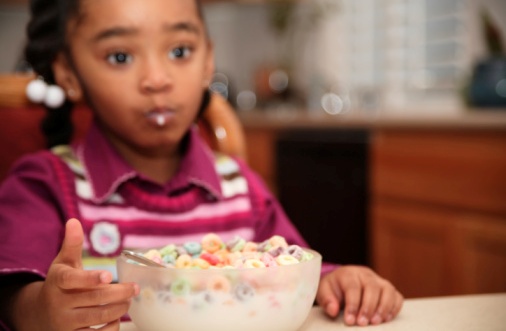 Recently the Environmental Working Group published a report on the amount of sugar in children’s cereals. Citing their “dirty dozen” (minus 2) list of high sugar cereals, the report shed some light on the sugar content of cereals that are often favorites of children. Some key issues emerge. We have unprecedented obesity in children and teens and according to the CDC 1 out of 5 children is overweight. The rate of obesity in our children has almost tripled in the last 30 years. The level of obesity seen by pediatricians and registered dietitians is staggering. It is routine for me to see teens whose weight top the scale over 250 pounds. Although sugar per se isn’t the sole reason for the rise in obesity, it is certainly one of the contributors.

Dietary patterns and food habits of our children simply don’t meet dietary guidelines. The 2010 Dietary Guidelines suggest limiting portions of foods with excessive amounts of saturated, trans fats, sodium and added sugars. The guidelines also stress the consumption of nutrient rich foods such as skim and low fat dairy, and of course fruits and vegetables. This report indicates that the first food of the day consumed by many children actually has more sugar than many desserts. Not mentioned in the report is how the amount of cereal served is often

more than the serving size listed on the nutrition facts panel — meaning the amount of sugar can be even more than anticipated. This is particularly true for teens.

Although many factors drive the pediatric obesity crisis, food marketing plays a substantial role by driving children’s food choices and overall diet and influencing purchasing decisions of parents. A recent study indicated that the elimination of advertising of poor quality foods and beverages to children on television alone could reduce childhood obesity by 18%, or approximately 2.8 million children. Parents, as always, have the most important role in controlling foods that are purchased. But excessive marketing through television and fast food outlets makes families a target for purchasing these foods the dietary guidelines seek to limit.

What can parents do?