A Mother’s Story — Raising An Infant With A Heart Defect: Part 3 Of 6 | Texas Children's Hospital

A Mother’s Story — Raising An Infant With A Heart Defect: Part 3 Of 6

Our introduction into the amazing world of parenthood… and then our abrupt reality check in the form of a life-threatening congenital heart defect & the successful medical interventions taken at Texas Children’s Hospital which taught us to never take a day for granted. This is our story.

eyd’s 9th week of life: Zeyd is really smiling a lot more — he is very responsive to me and my husband, imitating us by smiling back when we smile at him. Love it!

Zeyd’s 10th week of life: Zeyd continues to make more and more sounds and has his first laugh at the end of his 10th week.

Zeyd’s 11th week of life: Zeyd is growing amazingly since discharge. We could not ask for anything more.

Day 66: It is so unbelievably easy to let myself worry and there is always the constant question of everything that Zeyd does, all of his faces, his breathing, his sleeping — is this related to his heart? Or is this just normal for any infant? So, I made an appointment today with Dr. William Black because my worrying got the best of me. When I said that yes, Zeyd had been grunting every day, he called Dr. Shannon Rivenes, who said to come down to her office because grunting is not good, especially for Zeyd's particular case since he had already been in severe heart failure

prior to surgery. But by the amazing grace of God, after listening to him, she said she felt comfortable with waiting until his next scheduled appointment to get an echocardiogram. She said it would have been worse if he was grunting with every single breath, instead of his grunting here and there, occasionally. So she need not feel the need to get an echo right then and we were allowed to go home that day. Whoa is it easy to over worry and stress your body and mind out as a new parent, especially to someone like Zeyd and his heart!

Day 68: I look forward to being able to take Zeyd out to anywhere I want to go to. Hopefully I can after cold and flu season, but I will have to double check with the pediatrician. For now, we are supposed to keep Zeyd indoors and away from children and especially from anyone with active cold or flu symptoms, so that is definitely what I am doing. I do not wish to deal with RSV or any other viruses on top of a heart condition and recent surgery, so yes — I have hand sanitizer around every corner of the house!! Obsessed? Maybe a little…but it is all for his health promotion. Because of Zeyd's heart defect, he does fit a qualification to receive a shot called Synagis which is a monthly shot specifically for RSV. He receives the shot during cold and flu season. He received his first Synagis shot before discharge at Texas Children's. Although I worry so much about viruses and bacteria with Zeyd, this shot definitely makes me feel a little better. I hate him getting shots, it always makes me want to cry, but I am glad for his health that he does get this shot because I think it is so important to keep him free of any infection if at all possible.

Day 84: 11 weeks and 5 days old Zeyd rolled over by himself for the first time!! Milestone, check. 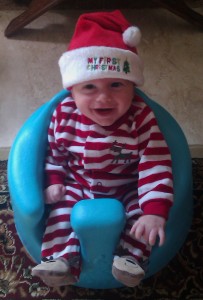 d is 13 weeks old today!! Ever since surgery his breathing has continued to be under 60 breaths-per-minute, and usually under 55, which is really great for him. Before his surgery he almost always breathed over 60 and had constant grunting, weak cries and retractions. So grateful and so happy and so thankful!

Day 95: Today Zeyd is on the Captipril, an ace-inhibitor cardiac medication, and also Lasix which helps get fluid out of his body, especially so it does not back up into his lungs & cause extra work for his heart, and he has been on these since his first visit to Dr. Rivenes, but we did decrease his Lasix dose, so hey — it is a start!!! Yay! Progress is progress, even if it is just going down on some medication, I’ll take it! Oh yeah!

Day 99: I had a panic attack yesterday. I took off Zeyd’s onesie and I was just staring at his chest because I saw Zeyd breathing fast, exactly like he did before surgery — probably in the 70’s-80’s. I literally had to tell myself to start breathing because I went into fear-mode. I called and left a voicemail with Dr. Rivenes’ nurse to check if we could see her or what she recommended. She called back and said to go see Dr. Black, our pediatrician, first and if it was heart-related then she would try and fit us in. I just love Dr. Rivenes. It is so nice to know we can see her if we need to. These doctors are amazing and really care for Zeyd. I made an appointment and Dr. Black fit us in this morning. He said Zeyd’s chest x-rays looked the exact same as the last ones, his heart sounded fine, he had gained weight, and we were free to go home. Had he seen a larger heart size or fluid in the lungs, or had his heart sounded different, he would have sent us to the cardiologist. Wow, it is so easy to go from 0 to 100 worrying about Zeyd when I see something I relate to his heart not functioning ideally. Panic attack resolved. Thankfully we get to go home this time and not the hospital. I pray my gratitude and thankfulness every ride back to our house from the doctor’s office, instead of going to the ER, and I hope I always do because every day with Zeyd's health is amazing and you don’t always realize that until you have to deal with something like this. I do not want to take any day with our health, especially Zeyd’s health, for granted.