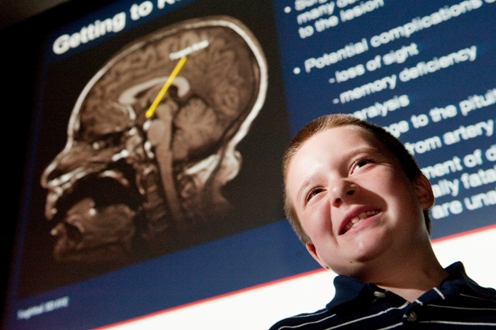 My nine-year-old son, Keagan, has had seizures his entire life.

His typical seizure, which occurred two-to-three times an hour, is called a gelastic or "giggling" seizure. It may be mistaken for an endearing giggle to the inexperienced eye and he was often reprimanded in school for laughing at inappropriate times. My husband, Khris, and I navigated our way through doctors and ultimately found a neurologist who diagnosed Keagan's condition — epilepsy. His seizures are caused by a group of cells, a lesion, located deep in his brain near the hypothalamus. He tried treating Keagan's condition first with medication and then with a vagus nerve stimulator (VNS), an implant that sent electrical impulses to Keagan's brain. In each case the treatment only helped for a short while. Meanwhile Keagan's seizures progressed into more sever "tonic" seizures, where his whole body would tense up and, exhausted, he would fall immediately asleep for an hour afterward.

As Keagan's seizures continued to grow more frequent, Khris and I knew we were running out of "safe" treatment options to help him. We needed a better solution. Our neurologist connected us with Dr. Angus Wilfong, epilepsy expert at Texas Children's Hospital. On our way to visit Dr. Wilfong, I told Khris that I hoped this would be a black-and-white decision. Dr. Wilfong described four surgical procedures that could potentially cure Keagan's condition. The most commonly use 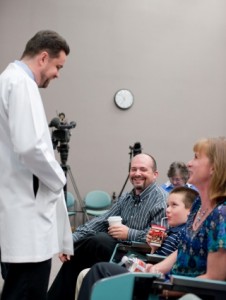 d was the most invasive, called craniotomy, and the risks were many. Another was a new laser surgery that was less invasive and less risky, but so new that only Texas Children's Hospital offered it and it had only been performed on three other children with epilepsy. This was not a black-and-white decision whatsoever. After talking with Dr. Daniel Curry, neurosurgeon, and Dr. Wilfong, we learned that the laser procedure was new for epilepsy, but had been in use for 10 years on patients with deep brain tumors. I phoned my mother who reminded me that Keagan's current condition was not acceptable and if we had the opportunity to remove it, we should take it. She said it sounded like we had our answer. She was right, but I wouldn't wish this decision on any parent. A few weeks before the surgery Keagan's grandma asked him if he knew what was going to happen Houston. Keagan replied that he was going to have "a little procedure" done. She told him that it was more than a little procedure, that it was brain surgery to take his seizures away. Keagan said he did not want his seizures to go away because he was afraid he would never laugh again. We feel blessed to report that the surgery went well and Keagan hasn't had a seizure since. Shortly after coming home, he was watching one of his favorite TV programs when we heard him laugh. His father and I froze thinking he was having a seizure. We peeked around the corner and realized Keagan was just enjoying the program. It was the first time we heard his genuine laughter and what a sweet sound it was! His father and I could not keep from crying. We finally have the Keagan we knew was trapped behind those seizures. That surgery was the toughest and best decision we ever made. We feel fortunate to have found Dr. Wilfong and Dr. Curry, pioneers in their field, who could offer such a life-changing treatment for Keagan.