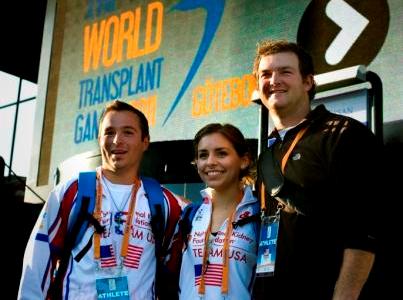 Congratulations to everyone on the USA team for a remarkable second place finish in the World Transplant Games (WTG) Medal Count (Gold 47, Silver 38, Bronze 27)! But as Gary Green, our Team USA manager, so eloquently said, "...it's not really about the medals but about the friendships and the camaraderie that this event brings to everyone connected with it." We agree that the World Transplant Games is a contest with all winners! Without donors, none of these transplants would have been possible. It all began on June 18th with Sweden's Prince Daniel, himself a kidney transplant recipient, officially opening the ceremonies. Ryan Flores, Carson Kainer and Leslie Meigs were the three participating transplant athletes sponsored by the Ren 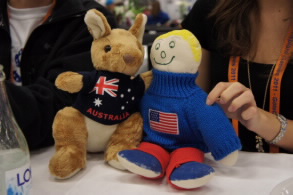 al Quality of Life Program at Texas Children's Hospital. In addition to their families, I was thrilled to be a part of their supporting fans. Leslie and Carson participated in Team Volleyball and the USA played against the UK, Italy and France. Ryan and Carson participated in both Team Golf and Team Bowling. In the Men's 18-29, they took the Bronze for Bowling. They bowled a total of 856 for three games. What a celebration we had at Strikes & Co! As the organizing country, Sweden was allowed to add one sport to the program and the local organizing committee picked Floorball, a type of floor hockey. The game is fast and the matches tough — even so, Leslie agreed to join the USA team. Her energetic spirit and sportsmanship earned her the nickname "Bruiser" from our Aussie friends. Sweden took the Gold and everyone agreed that it was all good fun. Ryan participated in Singles Tennis, Leslie in Team Badminton and Carson in Singles Petonque. On June 22, Carson Kainer took the Gold for the USA in the Men's 18-29 Ball Throw. He threw 87.30 meters or 95.4724 yards. What an audience that gathered after his first ball throw! Watch the video stream interview with him here! That same day, both Ryan and Leslie played Singles Table Tennis and Leslie took the Bronze for the Women's 18-29. At the WTG, the Flores, Kainer and Meigs families had unique opportunities to become acquainted by not only competing together but also by encouraging one another. The Games were an extraordinary forum to share their thoughts, perspectives and lives. Closing ceremonies concluded with a handover of the World Transplant Games Federation Flag to South Africa's Willie Uys and with athletes (now friends) trading country uniforms. We returned home with four medals, fabulous memories and many new friends! We're already excited for the 2013 WTG Games in Durban!