A young mother sits in the pediatrician's office with her child. As the doctor begins to explain the immunizations the child will receive, the mother interrupts and says, "Ok, but not the MMR vaccine. I've heard it causes autism." Despite numerous reassurances and 30 minutes of discussion, the child leaves without receiving the vaccine that protects against measles, mumps and rubella. It's a scene that has played out in countless numbers of pediatric offices across the globe. After all, it's just one vaccine, right? Wrong. Let's take measles, for instance. Before the vaccine was available, almost every child suffered from measles. Each year, approximately 500,000 Americans contracted measles and 500 people died. Fortunately, the MMR vaccine brought much needed relief to American families and reduced measles incidence by more than 98%. But where are we today? So far this year, 39 cases of measles have been reported to the CDC. Thirteen of the cases were imported by returning U.S. travelers. Of these cases, 7 occurred in children ages 6-23 months with 4 children requiring hospitalization. Cases have occurred in Minnesota, Florida, Massachusetts and Texas. In fact, 5 of the 39 cases occurred in Texas. Here's where it comes full circle — 6 of the 7 children were not immunized because of parental concerns about the MMR vaccine. In short, parents today often find themselves more concerned about the vaccine than the disease. Parental concern is understandable given the conflicting and frightening information on the internet and in the media. When the question was first raised whether vaccines, in particular the MMR vaccine, caused autism, scientists answered loud and clear. Study after study found no link whatsoever between the MMR vaccine, or any other vaccine, to autism. Many parents consider measles a harmless childhood illness and decide that the perceived risk of autism is greater than the real risk of measles. Subsequently, they forgo the MMR vaccine, leaving their child vulnerable to this dangerous vaccine-preventable disease. Measles should not be taken lightly. It can cause persistent fever, dehydration, diarrhea, ear infections, pneumonia and death. Pneumonia, in particular, is concerning given that is causes 60% of deaths from measles. But rather than bore you with clinical information let me share a real story of family who discovered just how serious measles can be. 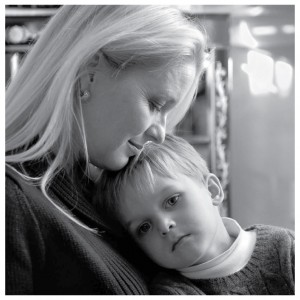 This is Vaughn Johnson and his mother, Delia. Vaughn and Delia contracted measles while on a family vacation in Mexico. Unfortunately, 19-month-old Vaughn had not received his MMR vaccine due to chronic ear infections. In addition to a rash, Vaughn had a persistent, high fever, ear infections, conjunctivitis, and painful sores in his mouth. He was hospitalized for 4 days. Delia also developed flu-like symptoms, a rash, and sores in her mouth. As she puts it, "it was the sickest I've ever been." Today, Delia realizes the value of vaccines and the danger of vaccine-preventable diseases. "Most people have the misconception that these diseases don't exist anymore, but I can promise you, they do," she says. Vaughn's story is an excerpt from Vaccine-Preventable Disease: The Forgotten Story.
Author
Rachel Cunningham, MPH, Immunization Project