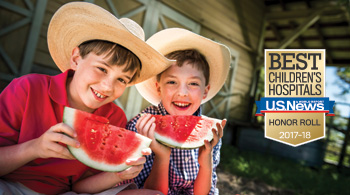 HOUSTON – (June 27, 2017) – Texas Children’s Hospital continues to earn national recognition as a leader in pediatric health care, ranking fourth among the nearly 200 pediatric centers surveyed by U.S. News & World Report in their 2017-18 edition of Best Children’s Hospitals. Consistently identified as a national leader, Texas Children’s is one of only 10 children’s hospitals across the country to achieve the Honor Roll designation, and the only hospital in Texas – and the southern U.S. – awarded this distinction. Over the last decade, no other pediatric hospital in the state has ever achieved an overall ranking as high as Texas Children’s. For more information, visit texaschildrens.org/usnews.

“We’ve dedicated six decades to conducting innovative research and providing the most advanced treatments possible to children in need of specialized care,” says Mark A. Wallace, president and CEO of Texas Children’s. “Our pioneering culture, coupled with our commitment to quality, service and safety, led us to become one of the nation’s premier pediatric hospitals and unquestionably the best in Texas.”

With the incredible partnership of academic affiliate Baylor College of Medicine, Texas Children’s continues to be a preeminent resource for health and hope to all children and their families, and earns the Honor Roll distinction by ranking as one of America’s best in, among other subspecialties:

These rankings are the result of a methodology that weighs a combination of outcome and care-related measures such as nursing care, advanced technology, credentialing, outcomes, best practices, infection prevention, and reputation, among other factors.

The 2017-18 edition of Best Children’s Hospitals is available online at usnews.com/childrenshospitals.