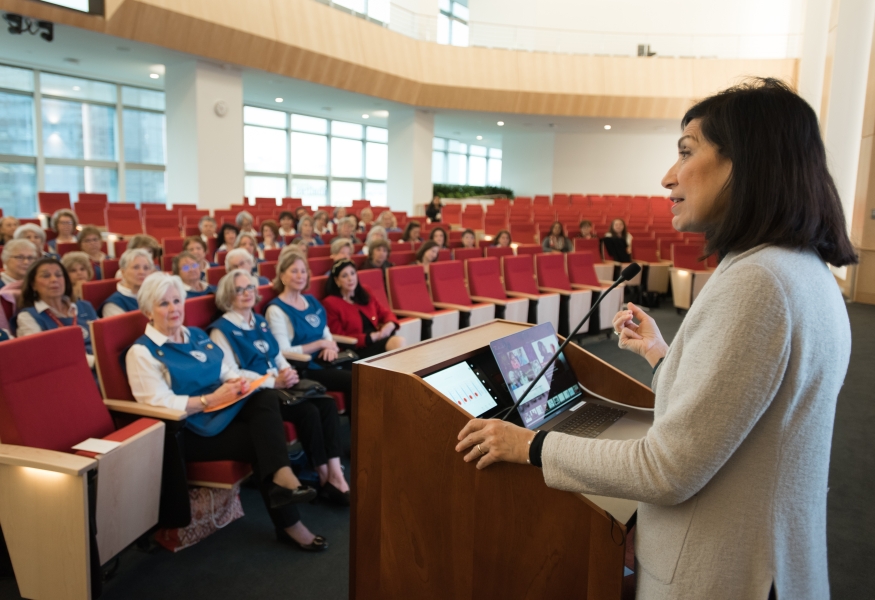 The Duncan NRI is a multidisciplinary group of 30+ physicians and scientists from Baylor College of Medicine working together to accelerate life-saving research and to develop effective therapies for the most complex, devastating neurodevelopmental and neurodegenerative diseases. Led by renowned neurogeneticist, Dr. Huda Zoghbi, the Duncan NRI’s rapid rate of discovery is helping to bridge the gap between basic research and life-saving clinical care. Since its inception in 2010, the faculty at the Duncan NRI has published over 1400 papers reporting on exciting research advances, discovered or co-discovered dozens of disease-causing genes, and led to major breakthroughs in autism, epilepsy, Alzheimer’s disease, depression, obsessive compulsive disorder and other neurological and psychiatric disorders.

Founded in 1923, The Blue Bird Circle is Houston’s oldest organization of women who volunteer their time and efforts to support pediatric neurology. This historic donation is being made to commemorate the Blue Bird Circle’s upcoming centennial anniversary and brings the organization’s gifts to Texas Children’s to over $25 million which will help advance life-changing neurological research at the Duncan NRI.

“As we embark on our 100th anniversary celebration, we are honored to mark this significant year with a transformational gift to the Duncan NRI,” said Abigail Tonry, President of The Blue Bird Circle. “Under the leadership of Dr. Huda Zoghbi, we know this gift will only help to further propel the Duncan NRI’s important work and keep it at the forefront of neurological research in Texas.”

“In 1983, the Blue Bird Circle gave the seed grant that enabled my initial research into Rett syndrome,” said Dr. Huda Zoghbi, Director of the Duncan NRI at Texas Children’s Hospital, Distinguished Service Professor at Baylor College of Medicine, and Howard Hughes Medical Institute Investigator. “Since then, we have been able to make great strides in our research culminating in several exciting discoveries. This gift of $10 million allows the Duncan NRI to widen the scope of our translational research and accelerate the trajectory of therapies from the lab to the patients.”

For more information about the Duncan NRI or to make a donation to fund research, please visit nri.texaschildrens.org.

About the Duncan Neurological Research Institute

Founded in 2010 at Texas Children’s Hospital, the Duncan Neurological Research Institute (Duncan NRI) researches and discovers treatments for devastating brain disorders that impact more than a billion people worldwide, including 300 million children. As the largest children’s hospital in America, Texas Children’s Hospital is uniquely positioned to study brain development in children and understand how the brain breaks down later in life. The Duncan NRI spans nearly 350,000 square feet and covers 13 floors. It is home to 30+ scientists and principal investigators who collaborate with physicians for rapid lab-to-bedside discovery, facilitating innovation that would be impossible in traditional scientific silos. This approach has led to over 1,400 published scientific papers, identification of dozens of genetic mutations, and major breakthroughs in autism, epilepsy, Alzheimer’s disease, depression, obsessive compulsive disorder and other neurological and psychiatric disorders. Texas Children’s Hospital covers of all the Duncan NRI’s annual operating costs, so every dollar donated goes directly to research. For more information, visit: nri.texaschildrens.org

About the Blue Bird Circle

The Blue Bird Circle is a 501(c)(3) organization of women volunteers. The Circle was founded in 1923 by 15 young women wanting to make a difference in children’s lives, and it is the oldest women’s charitable organization in the Houston area. The Blue Bird Circle’s mission is “to provide hope, love, and healing for children with neurological disorders and their families.” Fourteen percent of children are born with a neurological disorder, which can range from mild to very severe disorders that require a lifetime of treatment, therapies, and support. The Circle is made possible by over 300 dedicated volunteers who run the resale shop. The volunteers’ time, effort, and donations help support The Blue Bird Circle Clinic for Pediatric Neurology at Texas Children’s Hospital. For more information, visit www.thebluebirdcircle.com/.