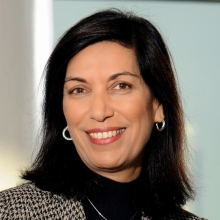 Huda Y. Zoghbi, MD is an internationally renowned neurogeneticist and serves as Research-in-Chief at Texas Children’s Hospital. She is the founding director of the Jan and Dan Duncan Neurological Research Institute (Duncan NRI) at Texas Children’s. She also is an Investigator with the Howard Hughes Medical Institute and a Professor of Pediatrics, Neurology, Neuroscience and Molecular and Human Genetics at Baylor College of Medicine (BCM).

Born and raised in Lebanon, Dr. Zoghbi received her undergraduate degree in biology from the American University of Beirut and began medical school there in 1975. The civil war in Lebanon broke out during her first year of studies. After she spent a semester living in the basement of the university to stay safe, Dr. Zoghbi moved to the United States, where she transferred to Nashville’s Meharry Medical College.

Dr. Zoghbi completed a pediatric residency as well as a residency in pediatric neurology at BCM in 1985. Seeing children with incurable, inherited neurological diseases and not being able to provide them with hope piqued her interest in research and led her to pursue a postdoctoral fellowship in molecular genetics under the mentorship of the preeminent geneticist Dr. Arthur Beaudet. She joined BCM’s faculty as an Assistant Professor in 1988. Dr. Zoghbi’s research spans neurodevelopment to neurodegeneration, and has led to key discoveries in Spinocerebellar Ataxia type 1, Rett syndrome, Bipolar disorder and Alzheimer’s disease.

In 2010, Dr. Zoghbi founded the Duncan NRI at Texas Children’s Hospital to develop treatments for brain disorders, which impact one billion people, including 300 million children. Under her leadership, the Duncan NRI has grown to over 30 principal investigators and 300 research trainees with a track record of groundbreaking discoveries, including:

Among Dr. Zoghbi’s many honors and awards are: